I miss the Houston Astros

I really do… I wish the Astros were still around.

But alas the Astros are no more and probably never coming back.

Now wait a second Sully, you might be saying. The Houston Astros are still here! Yeah they had a disappointing season last year, but they have a new manager in Brad Mills and play in a winnable division.

Heck, the Astros are celebrating their 45th anniversary! They aren’t going away.

Yes, there is a team called the Houston Astros still playing… but they aren’t THE ASTROS!

You can miss something that hasn’t really gone away. 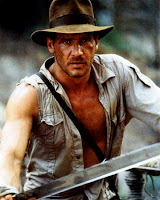 I miss Harrison Ford. I know he’s still alive and making movies, but I miss the cool “Han Solo/Indiana Jones/John Book/Rick Deckard/Dr. Richard Kimble” star who I haven’t seen in over a decade.

The Astros used to be one of the truly unique teams in baseball… and I would argue that their unique identity is long long gone.

They were an antidote to baseball tradition.

Teams like the Yankees/Red Sox/Cubs and Tigers were teams of the past. They embraced tradition when I was growing up. They played in traditional ballparks, wore the same uniforms that they had in the 1930s and had deep roots in their fan base.

The Astros looked to the future.

Once they changed their name from Colt .45s to the Astros, they turned their back on the wild west and became the outer space team.

Their logo was other worldly. 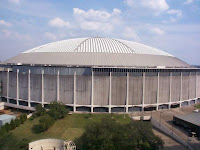 Their stadium looked like a UFO (or maybe the ship from Lost in Space.)

Even the grass they played on was other worldly. 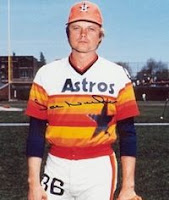 And of course there were the uniforms… the bad ass orange uniforms.

I personally loved them, but even if you hated them, there was no mistaking who was playing.

You would never turn on the game of the week and think “Which team with bright orange uniforms are playing?”

Besides the aesthetics there was a certain style to Astros baseball. They were not a slugging team. Save for the occasional Bob Watson or Glenn Davis, they lacked a masher and survived with line drive hitters like Jose Cruz.

But they were a pitching team.

Growing up in the late 1970s and early 1980s who was more intimidating than J. R. Richard or Nolan Ryan on the mound?

They were a futuristic, other worldly, innovative bad ass pitching franchise.

And they were super cool.

And now what the hell are they?

Do they have cool futuristic uniforms anymore?

No, they have generic looking uniforms... with both script AND pinstripes.

Pick either pinstripes or script.

And the Orange motif is gone! Their alternate uniform is RED!

They play in the same division as the Reds and Cardinals... way to pick a color that sticks out.

And they have moved out of their old dome into a new stadium which seems designed to create a phony aura of tradition about it.

The quirks are so forced and fraudulent that it is appropriate that the place was originally called Enron Field!

When baseball fields have quirks and irregularities, it should be because the park is adapting to its neighborhood.

The Green Monster is in left field at Fenway because Lansdowne Street is right behind the wall.

The houses on Waveland existed in Chicago before Wrigley Field was built.

Even in the new ballparks, the strange angles and features are there because of geography, whether it be the boats in McCovey Cove or the warehouse beyond Camden Yards.

But the quirks of the former Enron Field are all forced. 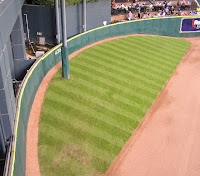 Is the slope in center field (AKA Tal's Hill) and the flagpole in play necessary?

Is there any reason for an old fashioned train carrying oranges to come across the left field wall? 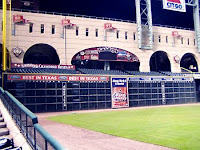 Do the left field "Crawford Boxes" jut out for any particular reason?

Not really, and they have turned Houston into a hitter's haven and no longer a place for great pitchers!

And doesn't the free floating Citgo sign over the left field wall seem like an attempt to create a "Fenway" type atmosphere?


I find all of this forced traditionalism by the Astros to be sad. It is as if they are screaming "Look at us! We're an old school team too!"

No you are not! The Astros had an identity and I think it made them a truly unique team.

And I miss that team.

And I don't think I am alone.

This weekend, my wife, parents and other members of our family went to Knott's Berry Farm for my twin sons' 5th birthday. In the parking lot, I saw a guy with a Houston Astros hat. I asked him if he was a fan and he said "Big time."

We talked a little about the 2010 prospects for the team (which we both felt were grim.) At the end of our chat I asked "Do you wish they went back to the orange uniforms?"

He responded "You bet. Those were the REAL Astros uniforms!"

I bet he misses the Astros too.