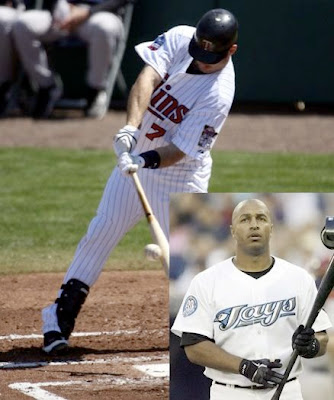 An unlikely team opened up their wallets and signed their All Star potential Free Agent to a long term deal.

And the deal is called great for baseball.
No doubt on the open market this All Star would sniff New York or Boston's offers.

And a home grown star, someone who is one of the good guys in the sport, would have been lost.

Instead competitive balance was restored... and a fan base who saw glory under the dome the 1980s and 1990s including a pair of World Series titles FINALLY got a sense of continuity with their favorite star.

Who am I talking about?
Joe Mauer?
Vernon Wells?

Wells signed the mongo 7 year $126 million contract after the 2006 season. The Blue Jays, who finished second that season, looked like they were getting ready to make a move on the AL East.

They did alright... they moved down.
And Vernon Wells has slumped and is a shell of his former self.

And you have to wonder if they didn't have such a backloaded albatross of a contract with Wells if the Blue Jays would have been able to keep Roy Halladay.

The only way to move Wells would be to take on another albatross, as I suggested earlier this year.

What I am saying is... I hope Joe Mauer stays healthy and doesn't slump.