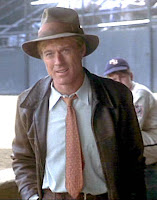 I watched The Natural again this weekend. (why? Because I can!)

And something hit me while I watched the brilliant first act of the movie. When young Roy was off on the train, struck out The Whammer on three pitches and gets shot by Barbara Hershey... he was traveling to his big league try out.

And what team was giving the young Natural a shot?

Roy Hobbs could have been the best left handed pitcher in Wrigley!
And he could have had such power that he could literally hit the cover off the ball in a Cubs uniform.

And oh yeah, if he homered in pre-1988 Wrigley Field, he wouldn't have to worry about the exploding lights.

But did Cub fans in The Natural's universe get to experience that?
NO!

He gets shot and who reaps the rewards of his talents? THE NEW YORK KNIGHTS!

It was Cubs scout Sam Simpson who discovered him. And what did the Cubs get from it?
A broken clock!

I am telling you, the Cubs can't catch a break even in fiction!