Albert Pujols doesn’t owe St. Louis anything… including an extension 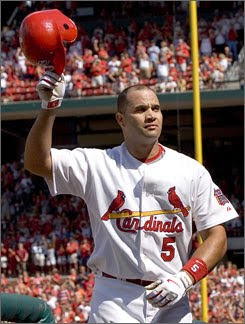 I have a feeling that I am not going to make any new friends in St. Louis with this post, but I hope that you can at least hear me out.

Albert Pujols is signed for 2010 and has a club option for 2011. I am going to go out on a crazy limb here and say the Cardinals will probably pick up that option.

After that… who knows? Clearly the Cardinals want to sign him to a long term deal. According to an interview last October he is leaving the contract issues “in God’s hands.”

If by “God” he means his agent Dan Lozano, then he is theologically correct.

Call it a hunch, but I think Pujols is going to stay in St. Louis.

But, if the Cardinals don’t pony up the cash, and Pujols skedaddles after the 2011 season and becomes a Yankee, or a Red Sox, or a Dodgers (assuming the McCourt divorce is over), or an Angel, or a Ranger (assuming Tom Hicks took over the team again and thinks an MVP slugger is the commuter lane to the World Series) or a Pirate (assuming it is snowing in Hell)… then I don’t want to hear ANY complaining from Cardinals fans.

But the truth can be harsh.

In this era of free agency and players not being associated with a single team, Albert will give Cardinal fans 11 years… and of his first 9 seasons, he finished in the top 10 of the MVP vote each year, in the top 5 for 8 seasons and won the award 3 times.

He’s been a home run king, batting champ and has led the league in OPS 3 of the last 4 seasons. He has 13 homers in 56 post season games with a career .322 October batting average and 1.009 OPS in the playoffs.

He’s been a playoff MVP and nearly destroyed Brad Lidge’s career the next season. He helped deliver a pennant in 2004, a World Series title in 2006 and led the Cardinals to 6 post season berths.

And he has put up eye popping numbers without being caught injecting something.

Now I am phrasing that carefully because who can be stunned anymore? But if he never tests positive, then he may already have a Hall of Fame resume.

And that plaque will have him wearing a Cardinals hat.
And #5 will be retired.
And Cardinals fans will have more than a decade of continuity.

In this day and age, asking for more than 10 seasons from a player is being greedy. He already signed one mongo 7 year deal with St. Louis, foregoing free agency. Asking him to do it twice might be too much to ask.

Would you?
If you were the best offensive force in the game and a sure fire Hall of Famer, would you pass up on making literally hundreds of millions of dollars?

What I am saying is I WANT HIM IN FENWAY!

I want Pujols mashing balls over the Green Monster… just for 5 years… enough time to win another World Series and sell some hats.

I can be greedy.

But if he does indeed stay in St. Louis, you can thank God for that… and by God I STILL mean Dan Lozano. 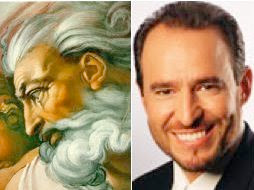