Looking into my crystal ball for 2007 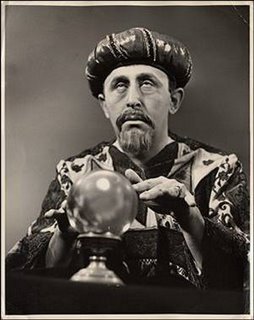 It is mandatory for baseball bloggers to make their annual predictions, and Sully Baseball will be no exception.

If anyone remembers my playoff picks I went a whopping 0-7 in 2006 post season series while my wife who doesn't follow baseball went 4-0.

So what I am saying here is don't print this out and head off to Vegas or anything.

AL EAST -
NEW YORK YANKEES
Yeah I know I'm a Red Sox fan and I'm as anti Yankee a guy as you will meet.
And yeah I know their pitching staff is a mess, they are a year older and the A-Rod soap opera will envelop the team... again.

And I know the Red Sox got a Japanese pitcher who has a pitch similar to Ray Milland in It Happens Every Spring. And Papelbon is mercifully back in the pen and Beckett should adjust.

But seriously... you don't pick against the Yankees in the regular season. It was like the Braves for that decade and a half. They are just designed to win the division. The Yankees will score 9 runs and the pitching staff needs to hold them to 8 until Rivera comes in. Very simple formula. They'll lose in the first round again, but it is another division crown for Torre... and more speculation of whether or not he should be fired.

AL CENTRAL -
MINNESOTA TWINS
The most exciting division in baseball, I got to pick the team with the Cy Young winner, the batting champ, and All Star closer and the MVP.
The White Sox pitching staff better not have aged, the Tigers better not take a step back and the Indians better have taken that step forward.

AL WEST
LOS ANGELES CALIFORNIA ANGELS OF ANAHEIM IN ORANGE COUNTY
The Gary Matthews "I was wondering how a bench player suddenly became an All Star" controversy not withstanding, this team can pitch (Colon and Weaver will be back and it will be like two major trades made) they have a legit MVP candidate in Vlad and lots of young kids who are about to blossom.
The A's will as always make it interesting. The Mariners have some talent but not enough and look out for the Rangers. Every team that fires Buck Showalter wins the World Series the next year.

AL WILD CARD
CHICAGO WHITE SOX
The won 90 games last year and got younger this year. Kenny Williams is a sharp GM and will pull the trigger on the right trade to put Chicago in the 90-95 win collumn and edge out the Red Sox, A's and Tigers for the Wild Card.

NL EAST
ATLANTA BRAVES
I know, a risky pick. But is there any team that is without a hole? You trust the Phillies' bullpen? The Mets' rotation? You think the Marlins won't have a let down? Or the Nationals won't stink? The Braves have some talent, still have a Hall of Fame manager and the Mets, Phillies and Braves will all each finish within 85-88 wins. It's been a full season since Atlanta had a playoff team. Their fans have suffered enough.

NL CENTRAL
ST. LOUIS CARDINALS
Don't look now, but the Cardinals are making a case to be the team of the 2000s (the subject of a future post.) In 7 years they have finished in first or tied for first 6 times, made the NLCS 5 times, won 2 pennants including the 2006 World Series title.
Not buying the Cubs influx of free agents (who is pitching?) the Brewers talent nor the Astros "We SWEAR Clemens is coming back" strategy. This is the Cardinals division (and decade) to lose.

NL WEST
SAN FRANCISCO GIANTS
This should be the most fun division to watch because all the teams have talent and almost all of them can pitch. I think Barry Zito will eat the NL alive and their droves of young pitching will keep them in every game while You-Know-Who will keep homering. The Dodgers have pitching talent to spare, but Grady Little managing. The Padres bullpen is as deep as any you will see, but will they have a lead to protect? The Diamondbacks have added The Big Unit to a pitching staff that includes the Cy Young award winner and even the Rockies have some talent. Look for the Giants to squeak it out.

NL WILD CARD
ARIZONA DIAMONDBACKS
Every year seems to have a team loaded with young players that makes it into the playoffs. And with future superstar Conor Jackson leading the lineup and a rotation with a one two punch Brandon Webb and a happier Randy Johnson... they are going to win a lot of games. And I wouldn't want to face them in a short series.