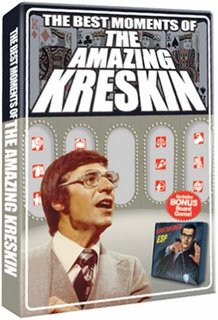 Got to make some other predictions!
It will be interesting to take a look at these at the end of the year and see how many of them I got so very wrong.

But I got to get these in before the season starts tomorrow.

AMERICAN LEAGUE MVP:
Vladimir Guerrero - Los Angeles California Angels of Anaheim in Orange County
With Garrett Anderson healthy this year, he should see more pitches and have a bigger year. And considering he was .329, 33 HRs, 116 RBI, .934 OPS last year... a step UP will be scary.

Joe Mauer - Minnesota Twins. How did Morneau win over HIM last year?

Miguel Cabrera - Florida Marlins. I wonder what big market club he'll wind up on. I hope the Red Sox.


AL CY YOUNG AWARD
Johan Santana - Minnesota Twins. Stay healthy Johan... you are about 1/3 of a way along a Cooperstown resume.


NL CY YOUNG AWARD
Barry Zito - San Francisco Giants. Best decision he ever made was avoiding New York. Even better was going to a pitchers paradise.


AL MANAGER OF THE YEAR
Mike Scioscia - Los Angeles California Angels of Anaheim in Orange County
I am predicting a lot of love in Anaheim this year.

AL Manager of the Year Candidate NOT named Guillen, Torre, Gardenhire or Leyland


NL MANAGER OF THE YEAR
Bobby Cox - Atlanta Braves. I get the sense they are coming back this year. Sorry Mets fans.

NL Manager of the Year candidate NOT named Cox, LaRussa, Bochy or Randolph

Bob Melvin - Arizona Diamondbacks. It helps to have the Big Unit back.


AL ROOKIE OF THE YEAR
Delmon Young - Tampa Bay Devil Rays. I know I'm supposed to pick Dice-K, but I think too few people consider him to be a rookie plus I think Delmon might just be one of those truly special talents like Ryan Howard who needs no adjusting time. Just hope he's done flinging bats at umps.

NL ROOKIE OF THE YEAR
Kevin Kouzmanoff - San Diego Padres. I know he succeed just so fans in San Diego can call him "The Koooz."

FIRST NL MANAGER FIRED
Charlie Manuel - Philadelphia Phillies. There are high expectations on this Phillies team and some early failures might mean an early exit.


BEST SOAP OPERA - AMERICAN LEAGUE
New York Yankees - Will A-Rod go? Will Jeter hug him? Who is pitching? And how dumb is Steinbrenner's son in law?

BEST SOAP OPERA - NATIONAL LEAGUE
San Francisco Giants - Will people care when Barry breaks Hank Aaron's record? Who will snub him? And poor Bruce Bochy goes from giving the ball to Trevor Hoffman in the 9th to Armando Benetez! Once Benetez is dealt the closer Merry-Go-Round should be interesting.