Saddest shirt to buy for the holidays 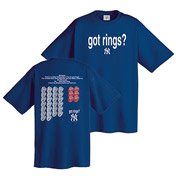 This shirt I saw being sold on MLB.com actually made me feel sorry for Yankee fans.

Let me explain.
As a rabid Red Sox fan who lived in New York from 15 years, I’ve been the recipient of all sorts of taunts from the Yankee fan base. And over the years, most of them were pretty concise and a lot of them landed.

For most of those years, all a Yankee fan had to say was “19-18!” and it was pretty much a conversation killer. There was no comeback. That was the flush to the Ace that no Sox fan could beat.

1 number. Four syllables. Stake to the heart of a whole region.
And even when the Yankees stunk (during the Kevin Maas/Andy Hawkins years) their fans could still yell “19-18” when the Sox were in town.

Red Sox fans were Hiroshima. Yankee fans were Truman. And they had NO moral quandry on dropping that bomb repeatedly.

Oh there was also bringing up the Curse.
And of course Pedro gave them a good one with “Who’s your Daddy?”

All very swift effective weapons tying down to a simple fact:
The Yankees always beat the Red Sox... no matter who the Red Sox field and who the Yankees field... for GENERATIONS... when it matters... the Yankees win.

And I was there that cold October night when Schilling was bleeding through his sock for game 6 of the 2004 ALCS. Sitting with my pal Jon Griggs in the bleachers hearing the 19-18 chants.

And the guy in front of me kept turning to me and saying “You know you are going to lose, right. I mean it’s cool you root for the Red Sox, but you understand, it is written... you will always lose to the Yankees... that’s how it is.”

He said this 3 times to me.

How could I refute him?
The whole game I was just waiting for the moment when the Red Sox would collapse... because as he said... it was written.

And they didn’t. In fact it was A-Fraud’s slap of Arroyo’s wrist and Tony Clark whiffing that seemed Red Sox like.

Well we all know what happened... The Red Sox won game 7 in a massacre where the Yankees didn’t even show up... celebrated a pennant in the Bronx... and the World Series was more of an afterthought than the US hockey team beating Finland for the gold in 1980.

And all the sports writers started lamenting “What is going to happen to the Red Sox fans? They’ve lost their identity!”

Yeah, cause we all LOVED being the Wile E. Coyotes of baseball!
How could we POSSIBLY deal with having what we wanted our whole lives?

We dealt with it by being just as obnoxious in victory as we were in defeat!
And being greedy by wanting more.

But nobody asked the REAL question:
How would this affect the Yankee fan’s identity?

We’ve seen how the greatest choke in the history of American sport has affected the team. George has become hellbent on acquiring every superstar in baseball with a “WIN ME ANOTHER SERIES BEFORE I DIE!” mandate... the team gets to the playoffs, tightens up and spends the winter wondering which other Alpha Dog is going to be inserted into the team.

But the fanbase is a different story.

Yankee fans I know have tried to shrug off 2004 like it never happened.
Like I said in “Reverse the Curse of the Bambino” a Yankee fan came up to me and said “I’m still going to chant 1918.” Of which I replied “Then you are an idiot.”

Oh really? Was the 19-18 chant a touching tribute to our boys who lost their lives in World War I?

Why didn’t Yankee fans chant “19-48!” when the Indians came to town?
Or “Ne-Verrrr Neeeee-Verrrr” when the Devil Rays stopped by?

Which brings us full circle back to the shirt.

GOT RINGS? It says on the front.

The new rallying cry.
Not exactly striking fear into anyone’s heart.
Unlike “1918” there is a response.

The answer to the question is “Yes. Yes our team does have rings. Thanks for asking.”

Yup... there are more for the Yankees. But the Red Sox have the most recent one.

But it keeps going.
For god sake they have a paragraph written in what looks like 12 point Helvetica font.
ON A T SHIRT!
A T Shirt should have a quick statement that you can read as a person walks by... not the preamble to the Magna Carta.

If you get your reading glasses out and get Vinny to stop and allow you to read the latest taunt... it’s really pathetic.

“Hardware - There is no better feeling than a ring on your finger. The Yankees have more rings than you can shake a SOCK at. 26 to be exact. OH... One more thing, it won't be 86 years before our next one”

First of all, taunts should not include the phrase “OH.... one more thing.” They also shouldn’t have puns.

But the most telling is the end.

There it is folks. The Yankee fan NEEDS that sense of superiority. They NEED that sense of “we always win for generations.” They need that “it’s written” smug sense of entitlement.

And it’s been taken away from them.

They don’t have that one number, four syllable atom bomb.
They’ve lost their identity.

As a Red Sox fan, I almost feel badly for them.