Second Act Yankees and other patterns 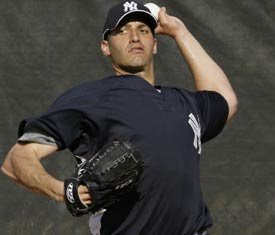 Andy Pettite returned to the Yankees last month, potentially helping to correct one of the biggest blunders in their recent history. When the Yankees low balled Pettite, a home grown big game winner beloved by the fans and the organization, his health was cited.

While Pettite did get hurt in 2004, he had a big Cy Young caliber second season in Houston as the Yankees were bounced from the playoffs with a weak pitching staff.

Of course, the Yankees are not getting the same player back. Pettite left as a 31 year old pitcher coming off a fantastic post season.
They are getting a 35 year old pitcher and one who has pitched well the last two years but in front of inferior hitters.

The Yankees are hoping that Pettite will lure his now best friend in the world Roger Clemens out of his latest retirement, making him also a second act Yankee. 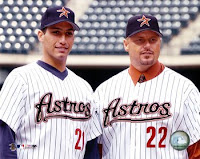 Clemens might be a freak of nature, but even Nolan Ryan eventually broke down... how many 44 year olds remain dominant?

But Pettite’s return and the potential return of Clemens shows an interesting pattern in Yankee off season acquisitions. And because I am a Red Sox fan, I naturally spend way too much time thinking about the Yankees and trying to analyze their next move.

Casual baseball fans assume the Yankees always try to go out and catch the biggest and most famous and expensive fish. But that is not always the case.

Neither Carlos Beltran nor Vladimir Guerrero, both the best offensive players in their respective free agent class, were gobbled up by the Yankees.
Daisuke Matsusaka and Barry Zito went elsewhere this off season.

No, more often than not the Yankees make moves based on two apparent motives:

1. Bring back an old hero from a previous champion
2. Bring over players from a team that humiliated them

The first category is pretty easy to understand and Pettite and Clemens fit the mold to a T.

There is a glaring hole in the team and Steinbrenner says “Get me [FILL IN FORMER FAN FAVORITE HERE]! He was good!”

Since Joe Torre’s first Yankee title in 1996, there have been 12 players who played in the post season for one of the 4 championship teams that have had more than one tour of duty in the Bronx.

Some fared well in their return trip. 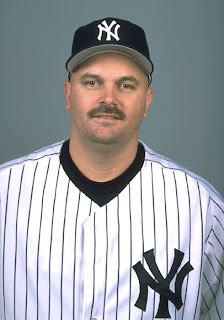 David Wells comes to mind. His second tour with the Yankees yielded a 19-7 and a 15-7 season. (Although he bombed badly in the 2002 playoffs and had to be pulled due to injury after 1 inning in a 2003 World Series start, a game the Yankees needed and lost.)

El Duque Hernandez returned after a year in Montreal to give the Yankees rotation a much need boost in the 2004 season.

Some gave the Yankees a little post season jolt.

Jim Leyritz kept on hitting post season homers in his second go round with the
Yankees and Luis Sojo's 2 out 9th inning single won the 2000 World Series.

However Pettite and probably Clemens end up, we'll see. But the Yankees aren't bringing them back for old time's sake. They have old timers day for that!


The other well from which the Yankees tend to draw from are teams that humiliated them.

I'm not talking about simply eliminating them from the playoffs. The Indians, Angels and Tigers have all sent the Yankees home in October... but they haven't seem keen to plunder those teams.

I'm talking humiliation. The kind that makes Steinbrenner's intense insecurities about the Yankees place in the world rise to the top.

It's not just that the Yankees
need to win... it's that other teams can't be happy either. 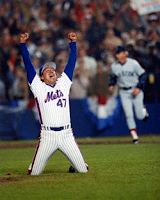 I know what you are thinking... the Yankees didn't play the Mets! It was my Red Sox who were humiliated by them.

The Red Sox LOST to the Mets. But they took away the city from the Yankees. In one of the few times in their history, the Mets were the main baseball attraction in New York. The Yankees had some winning teams but they couldn't get into the playoffs. They had some solid players (especially Mattingly and Winfield) but nobody had the Mets swagger.

There was a tough "We kick butt and know it!" bad ass quality to the Mets and Steinbrenner's squad couldn't replicate it no matter how many times they brought Billy Martin back.

And at the heart of the team were the two home grown, cooler than cool, talking the talk and walking the walk superstars that captured the imagination of the city: 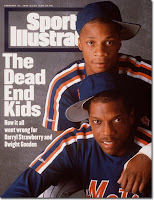 Guess where they ended up?
And Steinbrenner did his Father Flanagan act to a T when their lives fell apart due to drugs... but he also made sure that everyone thought of them as Yankees, first and foremost.

Well, all the members of the 1986 Mets have retired now. And besides Doc and Strawberry, you had Rafael Santana, Kevin Elster, Jesse Orosco and Bob Ojeda all suit up with the Yankees... and Lee Mazzilli became a fixture in the coaching staff.

Even the decision to sign Gary Sheffield over Vladimir Guerrero could be linked back to the 1986 Mets. Steinbrenner preferred Sheffield because he was a Tampa guy. He also just happens to be Doc Gooden's nephew.

When Edgar Martinez ended one of the best playoff series of all time with that 2 run 11th inning double, it marked the end of Buck Showalter's tenure as manager. It also
ended Don Mattingly's only post season appearance and their first taste of post season since 1981. (Hard to imagine now the Yankees going so long between October trips).

In some ways Yankee fans should feel happy that Edgar won it. It ushered in the Joe Torre era, stability in the manager's office and 4 titles in 5 years and 6 pennants in 8 years.

But at the time, there was nothing but humiliation... and a team to plunder.

Tino Martinez, Jeff Nelson and Luis Sojo all came over.

Later Randy Johnson and Alex Rodriguez made the trek as well.
So did fringe players like Jim Mecir, Chris Widger and Darren Bragg.

And there are always the Ken Griffey Jr rumors... Griffey... the guy who hit 5 homers against the Yankees in 5 games that series... the guy who scored the series ending run. He will someday atone for his sins in the Bronx!


Ah yes, 2001. The year that all of America (except your truly) were rooting for the Yankees in the World Series. The storybook finish was all written, complete with 2 run 2 out 9th inning game tying homers in the Bronx on consecutive nights.

Then with the Great Mariano on the mound, the Diamondbacks did the most unAmerican thing imaginable: They beat the Yankees.

There were two big heroes in that game 7:

Randy Johnson again was the Yankees nemesis, coming out of the bullpen a day after winning as a starter to go 3-0 in the series.

And pesky Tony Womack, whose game tying double in the 9th capped off a series where he confounded the Yankees.

Guess which teams they both ended up with?

So did David Delucci, who was a pinch runner in that 9th inning.

And don't think that the Yankees didn't have their eye on Curt Schilling... thank God Theo got down to Arizona and asked for seconds at Thanksgiving dinner!

Schilling leads us to ...

But losing to the Red Sox... a team with a long history... one whose history tended to include the phrase "And then the Yankees beat them again in dramatic fashion"... one where the idea of a Yankee loss was inconceivable... that would be bad enough.

Up 3-0 with Rivera on the mound? Wow. A face plant with no precedent!

When the Red Sox won the World Series in St. Louis a week after dispatching the Yankees, I turned to a buddy of mine and said "Watch a bunch of these Red Sox will turn up on the Yankees soon."

Well the exodus began subtly with Ramiro Mendoza but who are we kidding? He was a Yankee in Red Sox clothing. The Yankees wanted him for old time sake, not for celebrating with Big Papi et al.

Mark Bellhorn hit two key homers in the ALCS... and was a Yankee the next year.

Alan Embree was the pitcher on the mound when the Red Sox clinched the pennant...and was a Yankee the next year.

Mike Myers (not the actor) was part of the bullpen crew that shut down the Yankees during the long extra innings of games 4 and 5... and was signed by the Yankees after the 2005 playoffs.

Johnny Damon... the very face and spirit of the Red Sox idiot crew and whose two homers broke the Yankees back in game 7... shaved his beard.

And now Doug Mientkiewicz... the man who caught the last out at first... donning the pinstripes.

And you are nuts if you think someday Manny Ramirez and possibly David Ortiz won't be a Yankee eventually.