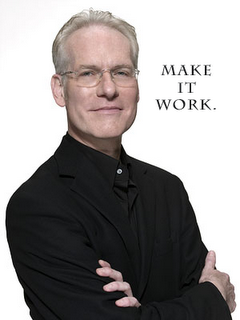 Turns out my ability to pick the winner of Project Runway is no better than picking the baseball playoffs.

I thought Uli had it in the bag... and tattoo boy won for his collection for which he made Michael Cimino look fiscally responsible.

They should have had a camera on Laura to see if she gave birth at the moment his victory was announced.

Also a camera should have been set up at Angela’s home, kind of like they do at the Cask and Flagon when the Red Sox play a playoff game on the road. She would huddle with her mom and no doubt their heads would have exploded like a scene in scanners.

I promise to make my Project Runway entries few and far between... but they inspired my wife to be a more accurate baseball forecaster than me. I thought maybe the reverse would be true and I would be able to pick the winner.