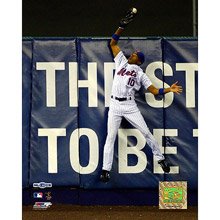 A game seven that nerve wrecking with the bases loaded in a 2 run game in the bottom of the 9th shouldn’t end on a called third. It seemed like such a cheat.

As I watched the Cardinals win the pennant and Shea Stadium quiet to a librarian’s standard, I felt badly for the fans at Shea, for Willie Randolph, who had a chance to have his team win the city’s heart, for the players who had never made it to a World Series and for baseball fans everywhere for having to sit through the upcoming Tigers/Cardinals World Series.

But I REALLY felt for Endy Chavez.
His catch was one of the most incredible plays I had ever seen. And not just the physical play, but the circumstances leading up to it and following it.

A game 7 is tied.
A pitcher, who everyone in the media has declared as the worst game seven starter in history, is pitching the game of his life... but is in trouble.

The manager comes out and asks how he is doing, which is always a stupid question to ask. What pitcher in the world would say “I’ve got nothing, Skip. Better replace me!”

Nobody! Not even Mike Mussina!
Only a moronic manager make a decision whether or not to remove a pitcher based on how a pitcher claims they are doing... especially in a game 7. (See “Little, Grady”)

So Willie turns to LoDuca and asks him, who says he’s OK to go.

The very next pitch... the slugger hits a sure fire home run which the outfielder, who is only in there because the regular left fielder was hurt and would have turned and watched the ball leave the park, make a perfectly timed leap, snag the ball in the web of his glove, and fire back to force a double play.

Entire team comes out to congratulate him before he hits the dugout step and he does a defensive curtain call.

This is a scene out of Major League.
Imagine manager Lou Brown (the gravel voiced James Gammon) and Jake Taylor (Tom Berenger) coming to the mound with Wild Thing Vaughn (Charlie Sheen) struggling.

LOU: How’s the heater, Vaughn?
WILD THING: I think I can get this guy.
LOU: What do you think, Jake?
JAKE: I think he can get him to hit into a double play.
LOU: You’d better be right, Taylor!

Lou goes back to the bench, crowd cheering... next pitch... deep... a sure fire home run... and Willy Mays Hayes (either Wesley Snipes or Omar Epps) leaps, makes an amazing catch and fires it back for the double play.

Jake walks up to Lou in the dugout.


Actually if I saw that scene, I’d say “C’mon! It wouldn’t happen like that... on the NEXT PITCH!”

And if the Mets had won, Endy Chavez would have been a folk hero forever in New York.
Yet another obscure player who unexpectedly shone in the post season and will become an unlikely immortal.

Endy was going to be one of those names.
One of those guys who despite not being a superstar will always be treated like one by the home fans.

And now, he will be a nice ESPN highlight... but his name will probably be forgotten.
In 10 years that clip will be shown and all but the most die hard Mets fans (and lunatics like me) will say “Who made that catch?”

Quite a fall from immortality.

Swing that bat, Carlos! For Endy’s sake!
Posted by Sully at 3:59 PM