Was that not the most lackluster World Championship celebration you have ever seen?

Wasn’t it bad enough we had possibly the least dramatic World Series I have ever seen?
I mean seriously, what are people going to remember about this series?

Kenny Rogers’ hand?
The fact that the Tigers clearly didn’t run fielding practice for the pitchers during their off days?

It has nothing to do with the fact that I don’t really care about either team. I am not a Braves nor a Twins fan, but I can remember almost every pitch of the 1991 World Series.

This series was dullsville.

But there was one potential glimmer of hope for something memorable.
This was, after all, a chance to see a home team win the World Series.
The last three series were won on the road, which is always kind of depressing. You see the players happy jumping up and down... cut to the crowd and some kid is crying in his father’s arms.

And the only time we see the fans of the team that won are those awkward shots of some local bar.

Winning on the road can be so lousy that I remember a couple of my fellow Red Sox fans actually saying to me before Game 4 of the World Series “I hope they lose these next two so they can win at Fenway.”

I of course beat both of them with a crowbar, but the point is winning at home is so much more special.

And that hadn’t happened since 2002... in Anaheim.
That’s right, the last time the home team won the World Series it was for the franchise whose identity is so confusing that they have had 3 different city names since the start of the 1996 season... AND THEY HAVEN’T MOVED!

This is a team whose fans don’t know when to get excited unless a monkey appears on the diamond vision. The last time a home team won the World Series, we were treated to a shot of Michael Eisner jumping up and down because he realized how much more he could get for the team when he put it on the market. And he was joined by John Travolta, also jumping up and down, even though his only connection to the Angels was he starred in the film “Michael.”

Not exactly a goosebump inducing moment.

The time before that was 2001, when the Diamondbacks won one of the best and most emotional World Series of all time. But COME ON! Arizona? That was only the team’s fourth year of existence. And yeah, it was the first championship ever for the city of Phoenix but long suffering were the baseball fans in those 4 years?

Before that was 1999, when the Yankees completed a sweep of Atlanta to win their second of three straight titles. A nice celebration, but Yankee fans were reconnecting with their smug entitlement to titles by then.

Before that was 1997... the Marlins. Again, another great game 7 and the fans seemed genuinely happy. I bet if you polled those same fans in August of 1997 “name one member of the Marlins” they’d be at a loss. Again, like the D-Backs, 5 year old teams don’t have long suffering fans. 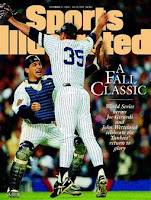 the last really great emotional home team winning the World Series moment. An unlikely underdog Yankee team (when was the last time you heard THAT?) stunned the Braves. I was in New York then, and the thrill of the city to have the Yankees reclaim the title of World Champions was palpable.

People forget it had been 18 years since that had happened... a lifetime in Yankees years. And Steinbrenner’s presence (and money) was looked on as a drawback. Remember there were “George Must Go!” chants and thoughts that they will NEVER return to being World Champions. Yankee fans lamenting Don Mattingly (the player with the WORST timing in baseball history) never getting a ring.

And suddenly, after getting whipped in games 1 and 2... and losing big in game 4.... they came back... won the elusive title. And the celebration in the stadium was so emotional even I, Mr. I Hate The Yankees, could sense the relief and joy of the fans. (Little did I know it would unlock a new dynasty.)

Which brings us back to the Cardinals... a title being won in St. Louis... a baseball mad city. An unlikely team bringing home the title for the first time in nearly a quarter century. A chance for the best and most emotional victory celebration since the Angels were the CALIFORNIA Angels.

And what did we get?

A half ass group hug?
Albert Pujols, a certain Hall of Famer now knowing he will never have the yoke of “He never won a ring” on his neck, gave a little fist pump.

A LITTLE FIST PUMP?
I do that when I realized I cooked the spaghetti just right. This guy just validated a career! Seriously, all Albert has to do is pile up some serious stats for 4 more seasons and rehearse his Cooperstown speech. Where’s the arms in the air leaping of Pedro Martinez? Where’s the tears of Paul Molitor? Where’s Wade Boggs dropping to his knees in prayer and then riding a horse around the ballpark?

And the fans? The rabid baseball loving fans? Yeah they seemed happy. But compare it to just a few weeks before. The Tigers win the Division Series (THE DIVISION SERIES!) and the rabid spontaneous ceremony was so emotional and genuine from the player’s victory lap to Kenny Rogers with the police officer on the dugout steps. It was a celebration of a return of Detroit’s love of baseball and it beautiful and sincere. And this was in a place called HOCKEY TOWN!

They cheered in St. Louis... they clapped. But it could have been an August win over the Cubs. There was no sense of Pujols and LaRussa joining Stan the Man, The Gashouse Gang, Medwick, Alexander, Hornsby, the Dean Brothers, Gibson, Brock, Schoendienst and Ozzie as Hall of Famers who brought a title to St. Louis.

COME ON PEOPLE!
They players couldn’t deliver anything emotional! It was up to you!