Reunions? There are lots of ex Red Sox out there... should any come back? 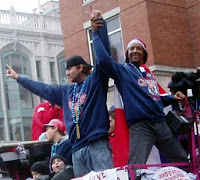 I had used The Godfather reference when saying Theo Epstein is as sentimental as Michael Corleone during the baptism.

Well, referring to the Corleones, I guess I am more like Vito.
Remember when he said to The Turk "I have a sentimental weakness for my children and I spoil them as you can see"?

That's how I feel about the Red Sox and their players.

I tend to be sentimental and want them to return... even if letting some go turned out to be the best in the long run.

Well this year's free agent class has a lot of old friends available.
Let's see who should come back... 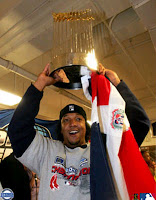 You'll find no bigger Pedro fan than me.
Lest we forget for 7 seasons how much excitement there was every time he took the mound.
Remember how he pitched with such a fun cockiness and a flair for the dramatic.
Yeah he was a prima donna... but he was OUR prima donna! And guys like that are fun when they are winning games for your team!
Nobody wanted him signed to a long term contract more than me (and I think that cost the Red Sox a division title in 2005.)

I love Pedro, but I also love that the last image we have of him pitching in a Red Sox uniform is throwing 7 shutout innings in game 3 of the 2004 World Series and not being lit up and released. 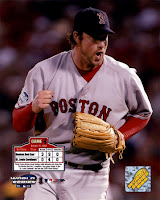 Remember at the end of Annie Hall when Alvy remembers all the good times with Annie? That's all he can recall. And he doesn't remember the arguing, the break ups and the misery.

That's the Red Sox fan relationship with Derek Lowe.
Yeah we remember him being an All Star reliever in 2000 and throwing a no hitter and starting the 2002 All Star Game.
We remember him coming out of the bullpen and closing out the 2003 Division Series against the A's.
We remember his heroic 2004 playoffs where we won all 3 clinching games, including 6 innings of 1 hit ball on two days rest in Yankee Stadium and then winning the World Series clincher in St. Louis.

What we forget is his pitching so badly in 2001 it took the Red Sox out of the playoff chase and essentially got Jimy (sic) Williams fired.

We forget his going 0-2 in the 2003 ALCS against the Yankees.
We forget his pitching so badly down the stretch for the 2004 Red Sox that Francona took him out of the rotation.
We forget what Bill Simmons dubbed "Derek Lowe face"... that psychotic meltdown expression that gave Red Sox fans as much confidence in Lowe as Lex Luthor had for Otis. 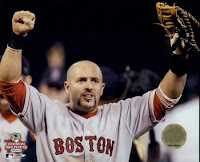 Innnnnteresting.
The stupid frat boy spirit of the Red Sox hasn't been the same since Millar was sent packing after the 2005 playoffs.
I know... boo hoo. We Red Sox fans had only a World Series title and another trip to the ALCS to comfort us.

But there is something to be said for Millar's prescience on the team.
AND if Lowell is hurt and slow to come back, why not move Youk over to third, recall Lars Anderson and have him platoon with Millar.

Let's face it, Millar will have a career at NESN and get standing ovations for the rest of his life in Boston.
He might be like Remy in terms of being a beloved funny figure in Red Sox history.

Why not take a flier?
The worst thing that happens is you have him in the clubhouse. 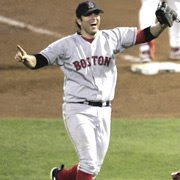 The guy did what everyone in New England wait their whole lives for:
He recorded the putout that won a World Series for the Red Sox.

And then inexplicably was given sh-- from Red Sox fans for not giving the ball back right away. No wonder people hate Red Sox fans.

The potential slow recovery of Mike Lowell and Kevin Youkilis' ability to play third makes a player like Mientkiewicz interesting.
He still has a solid glove at first and his .277 average each of the last two seasons shows he isn't a 100% automatic out.

If the Sox decide against Millar, what would be the harm of having a solid glove off the bench?

VERDICT: INVITE HIM TO SPRING TRAINING. MAKE HIM RETURN THE BALLS USED DURING INFIELD PRACTICE 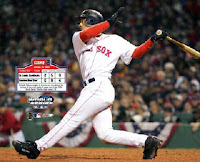 There's something we don't know about Orlando Cabrera.
He came to the Red Sox in the Nomar trade... played great defense, fit in perfectly in the clubhouse, had a terrific playoff, seemed to love Boston... and they let him go.

I refuse to believe it was just because Theo was enamored with Edgar Renteria. He must have done something or said something.

Either way, the contract that he should have signed with the Red Sox is up... and for what the Red Sox spent on Renteria and Lugo, they could have had Cabrera this whole time.

Oh well. Either way, the shortstop job is Jed Lowie's now.
Cabrera will have to be content with standing ovations the rest of his life.

Remember him?
The guy who was the face of the franchise from 1997 until the middle of the 2004 season?

Remember how his very name (plus the accent) became a rallying cry?

Man he had Don Mattingly's luck in terms of getting to the World Series.

Like Fred Lynn, his Hall of Fame career has been derailed by injuries while on the West Coast.
He can play first, however.
And while I prefer Millar as a part timer, it might be nice to see Nomar's saga in Boston have a happier ending. 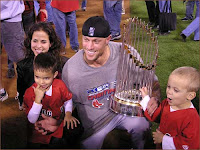 The Red Sox made Kapler manager of the Greenville Drive in 2007 only to see him return as a player in 2008 with Milwaukee.
I was as surprised as anyone.

From all accounts he is a great teammate and managerial material.
Not sure what he offers as a player anymore.


VERDICT: THE MANAGER OF YOUR LOWELL SPINNERS! 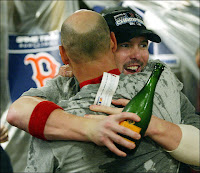 Trot has expressed interest in returning to Boston after a year in Cleveland and a kind of sad cameo with the Mets.

I guess the Red Sox could use a left handed bat off of the bench.
Even if he makes the team, I don't see him making it through the year.
Maybe he just wants to retire as a Red Sox.

VERDICT: SIGN HIM TO A MINOR LEAGUE CONTRACT AND INVITE HIM TO SPRING TRAINING 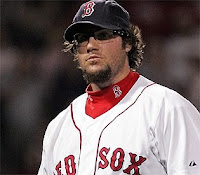 Ha!
Just checking to see if you were reading.

Tom Doyle sang is best with the Eric Gagne Song.


VERDICT: FORCE HIM TO GIVE HIS RING TO YAZ 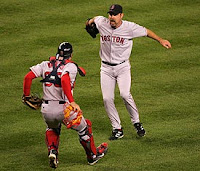 The man who got the last out against the Yankees in the 2004 ALCS is out there...
A man who has worn 9 uniforms and played in the post season for 5 different franchises in his 15 year career.

It didn't end well in Boston for Embree as he was cut midway through a dreadful 2005 campaign and was picked up by the Yankees.

There's water under the bridge and a bullpen to shore up, and you never know which set up man is going to be effective.

VERDICT: INVITE HIM TO SPRING TRAINING

Seriously, of all the heroes of the 2004 post season, Foulke is by far the most underrated.
The guy basically risked his career by giving the Red Sox everything he had and then some.

With the Red Sox on a verge of being swept, he saved the day in game 4, throwing 2 2/3 shut out innings allowing the Sox to go to extra innings where they won it on Papi's homer.

The next day he pitched another 1 1/3 shut out ball, setting up the 14 inning win. The day after that, he threw a shut out ninth to send the series to game 7. Without his heroics, there is no Roberts slide, there is no Papi homers, there is no bloody sock, there is no A-Rod slap.

And then gave Red Sox fans the highlight we all imagined but were never sure if it was going to come true: A World Series clincher.

The fact that it ended bitterly at all is disgraceful.

That being said, he had a mediocre year in Oakland and doesn't look like he has much left.

VERDICT: DON'T SIGN HIM... BUT SOX FANS NEED TO GIVE HIM A STANDING OVATION ANY TIME HE COMES TO FENWAY 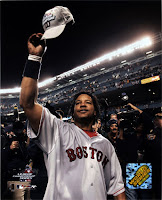 Oh, was I supposed to ignore Manny?
Remember him?

Yeah I know it ended really badly.
Like REALLY badly.

But call me a sentimental old fluff... but I'd still have him back.
I know it isn't happening, but I'd hate to see the MVP of the 2004 World Series as a villain.

So there you have it...
Maybe some of them will be back, or maybe Theo will continue to have ice water in his veins.
Heck.
It's worked so far.