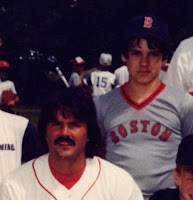 Hey loyal readers... which now consist of more than my cousin Dave.

In the past, Sully Baseball let its staff go during the off season, resurfacing mainly to discuss the Hall of Fame.
But this year, with a series of Government grants, we can afford to keep the extensive research and editorial staff on the payroll all winter.

Now of course I will analyze trades, ponder which free agents will land there and get angry when Jim Rice isn't elected into the Hall of Fame.

But to mirror my vow to write about each team during the regular season, which I did in 2007 and again in 2008... this off season the staff is going to write about every single team again before Spring Training begins in 2009.

But I am not just going to write anything.

They will also have 5 starting pitchers and 5 relievers.

And each team will have what I call "The 25th Man" who is a wild card. A hitter or a pitcher who just shouldn't be omitted from mention.

And to set very strict rules in my obsessive list writing, in order to be on the Home Grown Team, you need to be signed by a team and brought up through the farm system.

Players acquired as minor leaguers, like Roberto Clemente, Jeff Bagwell and Jason Varitek would all be the Acquired Team, even though they spent their entire Major League career in a single uniform.

As I started this already, I am amazed at how good some teams have been at drafting stars at some positions and been weak acquiring players. Or Vice Versa.

Some teams are so loaded with players that even though I will mention 50 players from every single team, some clubs will be missing some big names. The Yankees are so loaded with homegrown catchers that Hall of Famer Bill Dickey and fan favorite Jorge Posada had to be excluded.

The Red Sox have had so many great hitters come up through their system that former MVP Mo Vaughn, World Series heroes Kevin Youkilis and Trot Nixon, MVP candidates Mike Greenwell and Walt Dropo and fan favorite Rico Petrocelli had to be omitted.

And some roster spots are tough to fill out.
Let's just say the Marlins haven't had a great legacy of home grown relievers.
Also keep in mind that the farm system and the minor leagues used to be set up differently. Minor leagues and their players were often independent from major league teams, who would buy players off of their roster.
So to not lose my mind writing these, I will count a the first major league organization to sign a player as their "Home Grown" team.
Yes I know Joe DiMaggio played for the San Francisco Seals before he was a Yankee. But because the Yankees were his first big league organization, I am making him a home grown Yankee.
There is the tricky subject of Negro League players and Japanese League players.
I am going to count Negro League players as home grown and Japanese League players as acquired for this possibly murky reason:
I think the players coming from the Negro Leagues were acquired by Major League teams the same way they acquired minor league contracts and the players were simply looking to sign on with any big league club.
Japanese players act more like true Free Agents, offering their contracts to the highest bidder and would return to Japan if they didn't get an offer.
It's my list and my rules.

So let the obsessive list writing begin!
And hopefully some of you will disagree with me. Feel free to write in.
CLICK HERE TO GET BACK TO HOME PAGE