The Wood/Prior era has ended... 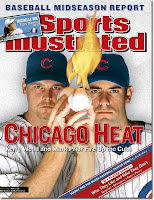 Kerry Wood was let go by the Cubs to make room for Kevin Gregg.
And thus ends the Mark Prior/Kerry Wood era in Chicago Cubs history.

Man... this is NOT how anyone thought it was going to end.
Remember how the promise of duel aces made a Cubs pennant seem all but assured?

Remember people comparing them to Johnson and Schilling that their very presence will mean doom for the NL Central and make short work of a short series?

Remember how Wood burst onto the scene with a 20 strikeout performance and a Rookie of the Year award in 1998?
And then came back from rehab to put up win after win...

And when Prior fell to #2 in the draft because the Twins took Joe Mauer, Cubs fans thought they had the next Tom Seaver?

When the Cubs lost the 2003 NLCS, there was a sense of comfort.

Heck, Zambrano was nothing to sneeze at as a 22 year old #3 starter.

They were going to be the Atlanta Braves of the 2000s.
And spare me the snickers of the Braves only winning one World Series title.
That one series would tide the Cubs fans over PLENTY!

If you had told me that after the 2003 NLCS that Prior, fresh off of an 18 win season, would win only 18 games over the next 3 seasons combined and not pitch after the 2006 season... and that Wood would also win only 18 games over the next 5 seasons (albeit including a fine year as a closer) and would be unceremoniously dumped for the Marlins mediocre closer... I would say "Yeah right! And the Red Sox are going to win 2 World Series and an African American Guy with a Muslim name will be elected President!"

But here we are.

Prior is 27. Wood is 31.
They are both not only ringless but now no longer Cubs.

It's a cautionary tale for those who predict dynasties.
And also shows you how impressive those Braves teams actually were... contending for that long.

And keep in mind they won one fewer World Series in 14 years than the Cubs have won in 105 years.
Not a bad ratio.