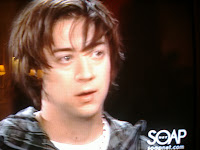 I always thought Tim Lincecum looked like he was 9 years old.
A teenager at best.

But now I see it!
He looks like Spinelli (AKA the Jackal) from General Hospital.

That's right the guy who won the Cy Young Award looks like the dorky but lovable one time hacker who helped solve the Text Message Killer, never knew that Georgie actually was in love with him and now is in love with Cooper's one time girl friend Maxie who he joins on a stake out of the Karpov family all the while helping set up a wedding that will no doubt end in one of Sonny Corinthos' accomplices getting shot.

And how do I know so much about General Hospital?
Well, I let my wife have the clicker when the game isn't on.