Trevor Hoffman is heading to the Giants... and why that may not be a good thing

The Padres are being dismantled.
That's what you do when your team loses 99 games and are filled with veterans.
I am sure they can lose 99 games with kids.

And long time Padre closer Trevor Hoffman is being set loose and the staff here at Sully Baseball believes he will land with the San Francisco Giants.

It would be a reunion with manager Bruce Bochy from 1995 until the end of the 2006 playoffs.
And a team filled with young pitchers including a Cy Young award winner in Tim Lincecum and an All Star closer in Bryan Wilson would welcome the All Time Saves leader to steady that bullpen and all of a sudden the Giants pitching staff would be set to take on the NL West.

Ohhhh boy.
Have we learned nothing from Trevor Hoffman?
So we still are under the delusion that he is a Hall of Famer? 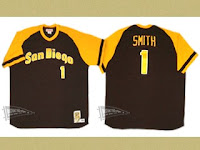 This guy is the ultimate save compiler but when the games matter, his uniform bottom turns browner than the Padres uniforms from the 1970s.
Need to review the sorrow he has brought Padre fans over the past decade or so?
Read it and weep.

And that was his supposed prime!


Wasn't it bad enough for Giants fans to suffer through Armando Benitez?