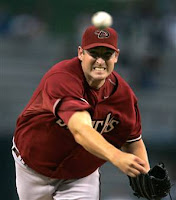 Life is good for Brandon Webb.

He's 29 years old... he has pitched in the All Star Game, the Division Series and the ALCS.
He has put together 3 terrific seasons in a row.
He is a millionaire many times over and will only get richer as he is the most valuable of commodities:

You can win a Cy Young by a fluke (Helllllllo Steve Bedrosian!)
But not two!

That always looks good on your resume when you start piling up numbers and make a case for the Hall of Fame.
Yeah it's early, but 7 more ace seasons and we might be talking.

With the Diamondbacks ahead in the standings with a chance to be up 4 1/2 games going into September, Webb lasted 3 1/3 innings, giving up 8 hits, 6 earned runs and 2 homers with 3 strike outs.

The Dodgers took over first place for good the next week when Webb lasted 5 2/3 innings giving up 5 hits, 7 earned runs, walking 6 with another homer striking out 6.

Now what would happen if we remove those two bad starts?

But aces are supposed to pitch the big games.
Let's say he pitched those games and gave a quality start both times as quality starts are currently described.
6 innings, 3 earned runs and let's say 4 strikes outs.

Not an unreasonable request from a Cy Young candidate in a big game!
And let's have him split the two games.

And maybe his team would not be as demoralized.

He'd probably have his two Cy Young awards.
Not a guarantee for the Hall of Fame (helllllllo Bret Saberhagen!) but not a bad start.

If he falls just short of Cooperstown, I wonder if he'll be thinking of those two games against the Dodgers.
I know I will be... but that's more a sign of my own issues.