The Coco Crisp Era... A Look Back Coco Crisp was sent to baseball purgatory (a.k.a. Kansas City) ending his 3 year tenure with the Red Sox.

He never became the star we had all imagined when he was picked up from Cleveland to fill in Johnny Damon's shoes...
But along the way he picked up a World Series ring and more than a few memorable moments.


-1. Red Sox Nation was still stunned that Johnny Damon was shaving his beared and cutting his hair for Yankee dollars. 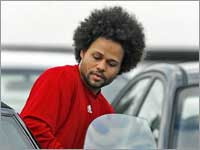 We all thought “Are we ever going to have a centerfielder that makes us smile again?” Then we found out that the Sox had acquired Coco Crisp… and admit it, you smiled again. 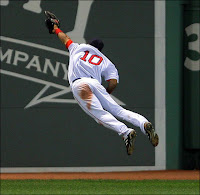 - 2. He broke his finger and never got his bat going, but his glove didn’t seem affected. He was frequently featured on Sports Center including this gem against the Mets on June 29th. 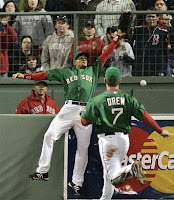 - 3. Coco fell over the right field wall trying to catch Alex Rodriguez’s homer on April 20th, 2007. He didn’t get it, but that effort was the moment I realized there might be something special about the 2007 squad.

- 4. In that same game Coco hit a game tying triple off of Mariano Rivera in the 8th inning… all while wearing horrific green uniforms in honor of Red Auerbach.

- 5. Coco’s career was endangered in an August game in Seattle… by the Mariner Moose! The mascot nearly hit Coco while driving his ATV around the park. While in the end Coco wasn’t hurt, it brought about a healthy debate: Whose name is stupider? Mariner Moose or Coco Crisp? 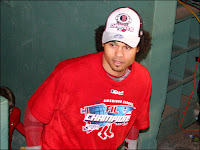 - 6. Made a diving into the bullpen wall catch to clinch the 2007 pennant against the Indians. At that point the score was 11-2 and you’d think he’d not sacrifice his body as it wasn’t a game saving situation. But he did anyway… and you’ve got to love that about him.

A side note... Andy Marte, the stud prospect the Red Sox gave up for Coco Crisp, wasn't even on the Indians 25 man roster for the 2007 playoffs. Crisp might not have been a star in Boston, but at least he stayed on the big league roster!!! 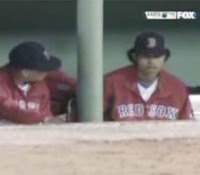 - 7. In a World Series that featured only one dramatic game (game 2) the highlight could have been Coco Crisp’s conversation with Royce Clayton about Taco Bell’s Stolen Base Promotion. Granted, Coco is the straight man in the exchange, but he’s a good straight man setting up all of the information for Clayton’s bewildered response.

- 8. Coco is as responsible as anyone for making the Red Sox/Rays rivalry a heated one. On June 4, Crisp slid in hard to Akinori Iwamura. The next day James Shields plunk Crisp starting a bench clearing ball… all the while your friend Sully was live Blogging on Rays Index. You’ve got to love a guy willing to avoid a punch and then throw one in honor of the Sox.

- 9. Coco came up big in Game 5 of the 2008 ALCS after he was given the starting assignment by Francona. His 2 out single prolonged the 7th inning. At the time it seemed harmless. The Sox were down 7-0 and he was prolonging the agony. But Pedroia singled home a run the next at bat… and Big Papi homered to make it 7-4, starting the biggest come back… but it was set up by Coco’s single.

- 10. Trailing by a run with the Red Sox 4 outs from elimination and Lowrie on second, Crisp fouled off what seemed like 600 pitches before singling to right field to tie the game. He was tagged out trying to reach second, but by then the game was tied 7-7… the biggest comeback was almost complete.

Did Coco put up All Star numbers?
Nope.

But he gave us some good memories and let's hope he gets a standing ovation everytime he comes back.
Just don't make too many great catches against the Sox, Coco.
And I hope you got your Taco.