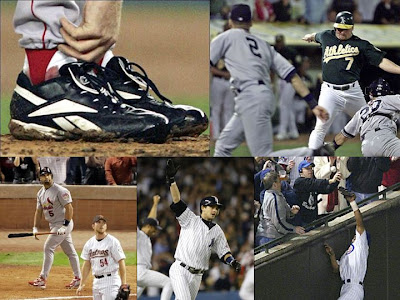 This decade is going to be over in a few weeks, and still nobody can tell me what to call the last 10 years.

Is it the Two Thousands? Is it the Twenty O’s?
And no, it is NOT the Oughts.

But one thing you CAN call it was a great decade for Post Season Baseball.

Well let’s end that charade. The present has been great! This has been an amazing decade with wonderful games and images that will be iconic in baseball history.

Well when the decade began, we had yet to experience…

- Jeter’s flip to get Jeremy Giambi out at home.
- The Yankees 9th inning comebacks in back to back games in 2001.
- The Diamondbacks rally off of Mariano Rivera.
- Grady Little leaving Pedro Martinez in too long.
- Aaron Boone’s home run
- Steve Bartman interfering with the foul pop.
- Dave Roberts stolen base.
- The bloody sock.
- A-Rod slapping the ball out of Arroyo’s glove.
- Pujols’ homer off of Lidge

There were absurd images…

- Clemens throwing the bat at Mike Piazza
- J. T. Snow picking up Dusty Baker’s 3 year old son as he ran into the field of play during Game 5 of the World Series.
- Don Zimmer and Pedro Martinez’s interesting confrontation.
- A. J. Pierzynski’s running to first base on the third strike and starting a game winning rally.
- Two Dodgers being thrown out at home plate on the same play.
- Joba Chamberlain covered in midges.
- Game 5 of the 2008 World Series being suspended in midgame.
- Matt Holliday dropping the final out of the game, setting up a game winning rally.

There were four series that ended with walk off homers… with Aaron Boone, David Ortiz, Chris Burke and Magglio Ordonez .

And one series ended with a bunt.

So before we start a new decade, let's pay homage to what was a terrific (if unclearly named) decade.

Not to quote Carly Simon, but these are the Good Old Days for post season baseball. Let's not wait 20 years to acknowledge that.

There are two "Best Games" for each game in the Division Series because each league plays two Divison Series.

So let's take a look at

THE BEST PLAYOFF GAMES OF THE 2000s

For the Decade's BEST ONE GAME TIE BREAKERS click here

For the Decade's BEST GAMES OF
THE WORLD SERIES click here