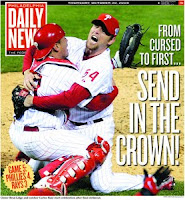 12 months ago Brad Lidge was on the bottom of a pile... the perfect year as a closer completed... and clinched a much desired World Series title for Philadelphia.

12 months ago Cole Hamels was the young and handsome ace who won the NLCS and World Series Most Valuable Player.

12 months ago Brad Lidge and Cole Hamels were immortals.

Now Lidge has become a villain again as his 2 out, 2 strike nobody on meltdown cost the Phillies their best chance in sending the series back to the Bronx.

And if there is a bigger villain it is Cole Hamels who has gone from Post Season Ace to bust who pitched timidly to Andy Pettitte and just wants it to end now.