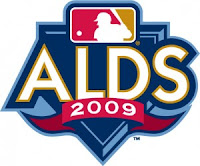 Now people who grumble about East Coast bias may grind their teeth reading this post.

But what am I supposed to do? The Yankees played in nine Division Series this decade and the Red Sox played in six. So there are bound to be a bunch of Yankee and Red Sox highlights here.

But there are also lots of games featuring the small market A's and Twins as well as the Angels, Mariners and White Sox.

And a few honorable mentions when need be. 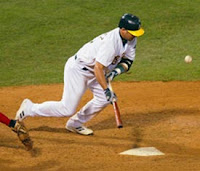 The Red Sox behind Pedro Martinez seemed ready to take a 1-0 series lead. But the A's rally off of the Boston bullpen, sending the game into extra innings.

With the bases loaded and 2 outs in the 12th, Ramon Hernandez, not exactly a speed demon, lay down a bunt scoring Eric Chavez with the winning run. 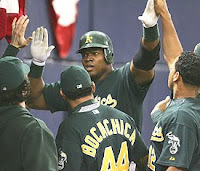 The Twins were favored to win Game 1 with ace Johan Santana on the mound. But Barry Zito out pitched the eventual Cy Young winner, not allowing a hit until the 5th inning.

Frank Thomas returned to his MVP form with a pair of homers and the A's were on their way to a surprising sweep.

Honorable mentions for Game 1 of the American League Division Series
2000 – Mariners 7 White Sox 4 (10 innings)
The White Sox leave the winning run in scoring position in the 9th inning. The Mariners take the lead in the 10th as Edgar Martinez and John Olerud smacked back to back homers off of Keith Foulke.

2002 – Twins 7 A’s 5
The heavily favored A's take a 5-1 lead in the second and the game looked like Men versus Boys. Then the Twins came back in the 6th, highlighted by Doug Mientkiewicz's homer and Jacques Jones' double. The Twins stunned the A's in the game and eventually the series.

The Midges game! A swarm of bugs descend onto Jacobs Field (or whatever they are calling it now) and gets Joba Chamberlain off sync, eventually allowing the tying run to score on a wild pitch.

Fausto Carmona wasn't as affected as he struck out Alex Rodriguez to send the game into extra innings. 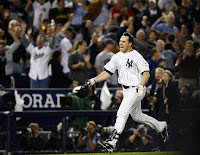 The Twins took a 2 run lead into the 9th with All Star closer Joe Nathan on the mound and seemed poised to tie the series at 1 going back to Minnesota. But Alex Rodriguez slammed a 2 run game tying shot in the 9th to send it to extra innings.

The Twins blew a bases loaded no out opportunity in the 11th (the same inning a Joe Mauer double was called foul by the left field line umpire.) In the bottom of the 11th Mark Teixeira homered to end the game.

Honorable mentions for Game 2 of the American League Division Series
2004 – Yankees 7 Twins 6 (12 innings)
The Twins rally off of Mariano Rivera to send the game into extra innings and Torii Hunter homered in the 12th. But the Yankees rally against an exhausted Joe Nathan with an RBI double by Alex Rodriguez and a game ending sacrifice fly by Hideki Matsui.

2006 – Tigers 4 Yankees 3
The seemingly over matched Tigers rally off of Mike Mussina, highlighted by an RBI triple by Curtis Granderson. Joel Zumaya overwhelmed the Yankees bats and closer Todd Jones gets Posada, Cano and Damon out with the tying run on base in the 9th.

2007 – Red Sox 6 Angels 3
Manny Ramirez hit a 3 run, 2 out walk off homer in the bottom of the 9th against Francisco Rodriguez that probably hasn't landed yet. Manny's pose at home was the most memorable image of the Red Sox' 2007 World Championship run. 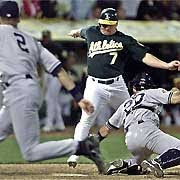 The 3 time defending Champion Yankees were on the verge of being swept by the younger A's. And Barry Zito did his job, holding the Yankees to 2 hits, including a solo shot by Jorge Posada.

The A's rallied off of Mussina in the 7th when Terrence Long doubled to right sending Jeremy Giambi home. The relay throw home was wild but somehow Derek Jeter intercepted it and flipped to Posada where he tagged out Giambi standing.

The A's had a chance to win the series in the 9th but Mariano Rivera pitched around a Jermaine Dye double. The Jeter flip has become one of the most famous sports images of the decade. The Yankees went on to win the next three games. 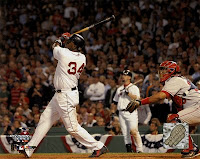 The Red Sox seemed ready to complete a three game sweep of the Angels when they took a 6-1 lead late into the game. But the Angels tied the game, thanks in large part to a grand slam by Vladimir Guerrero that silenced Fenway Park.

Derek Lowe got out of a 10th inning jam and David Ortiz hit a walk off, series winning homer off of Jarrod Washburn that sent Fenway into delirium.

Honorable mentions for Game 3 of the American League Division Series
2000 - Mariners 2 White Sox 1
The White Sox, looking to avoid a sweep, cling to life with a 1-1 tie going into the 9th. But Olerud got on base and Piniella brought in Rickey Henderson to pinch run for him. Not a bad option off of the bench.

With runners on the corners, Carlos Guillen pushed a bunt past Keith Foulke, scoring Henderson and clinching the series for Seattle.

2003 – Red Sox 3 A’s 1 (11 innings)
The game played during my wedding. The A's, looking to sweep the Red Sox, made a pair of base running blunders rounding third base that helped send the game into extra innings. Trot Nixon homered off of Rich Harden to win the game and I had my first dance with my wife.

2005 - White Sox 5 Red Sox 3
In the 6th inning, with the White Sox up by only a run, Boston loaded the bases with nobody out. Chicago manager Ozzie Guillen called in Boston nemesis (and 1999 ALCS MVP) El Duque Hernandez to put out the fire. He got Jason Varitek to pop up. Then Tony Graffanino had a 10 pitch at bat that ended with a pop up. Then Johnny Damon had his full count check swing called strike three, to end the inning.

The White Sox would tack on an insurance run, eliminate the champs and win their first post season series since 1917.

But the Angels rallied highlighted by a full count walk to Chone Figgins, a 2 strike RBI single by Bobby Abreu and a 2 run go ahead single by Vlad Guerrero. The Angels shut down the Red Sox 1-2-3 in the 9th and finally vanquished their tormentors. 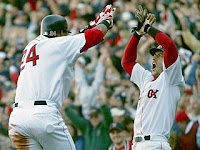 The day after the Trot Nixon homer (and my wedding), the A's looked to close out the Red Sox. Jermaine Dye's 2 run homer gave the A's the lead, which they carried into the 8th inning.

With 2 outs and 2 on in the 8th, David Ortiz hit a 2 run double off of A's closer Keith Foulke to give Boston the lead.

Scott Williamson got the A's 1-2-3 to send the series to a Game 5 showdown.

With Johan Santana starting Game 4, the Twins were in good shape to force a deciding Game 5. And they seemed even more ready to when they took a 5-1 lead into the 8th inning.

But the Yankees rallied, highlighted by a 3 run homer by Ruben Sierra.

In the 11th, Alex Rodriguez doubled, stole third and scored on a wild pitch. Rivera would shut the Twins down 1-2-3 in the bottom of the 11th, clinching the series and setting up a Red Sox/Yankees showdown.

Honorable mentions for Game 4s of the American League Division Series
2001 – Mariners 6 Indians 2
The Indians were looking to stun the 116 win Mariners and win the series in 4. Bartolo Colon, who had shut down the Mariners in Game 1, took a 1-0 lead into the 7th, thanks to a Juan Gonzalez homer.

But the Mariners rallied for 3 runs in the 7th to take the lead and put it away with a 2 run homer by Edgar Martinez in the 9th to send the series back to Seattle, where the Mariners clinched.

2008 – Red Sox 3 Angels 2
The Angels avoided being swept with a 12 inning victory in Game 3. In Game 4, Torii Hunter hit a 2 out, 2 strike 2 run game tying single in the 8th, giving the Angels life. A botched squeeze play by the Angels helped kill a 9th inning rally. In the bottom of the 9th, Jason Bay dropped a ground rule double over the head of right fielder Reggie Willits. He would score the series ending run on Jew Lowrie's 2 out single. 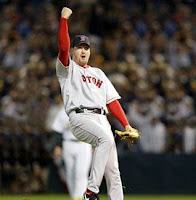 One of the most thrilling games I have ever seen... granted I am partial as a Red Sox fan.

Barry Zito took a 1-0 lead against Pedro Martinez into the 6th. But Varitek homered to tie the game and Manny Ramirez hit a 3 run shot (and styled at home plate) to give the Red Sox the lead.

The A's crept back and put the tying and series winning runs on base with one out in the bottom of the 9th. Derek Lowe was pressed into closing duties and got pinch hitter Adam Melhuse out looking. Then with the bases loaded caught Terrence Long looking, gave an interesting gesture to the A's dugout and celebrated with his teammates. 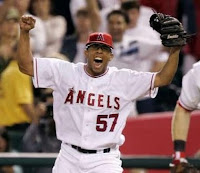 But Santana settled down and the Angels rallied off of Mike Mussina. The high light of the Angels come back was the collision in right field between Yankee center fielder Bubba Crosby and right fielder Gary Sheffield that turned Adam Kennedy's fly ball into a come from behind triple.

In the 9th A-Rod hit into a critical double play and Francisco Rodriguez got Hideki Matsui to ground out and end the series.

Honorable mentions for Game 5 of the American League Division Series
2000 – Yankees 7 A’s 5
Game 5 looked like a laugher for the Yankees as they scored 6 runs before the A's even came to bat. But Kevin Appier and two other relievers held the Yankees to 1 run the rest of the way as the A's mounted a come back.

They cut the lead to 2 and many times had the tying run at the plate, but the Yankee bullpen would not let the tying runs score.

2002 – Twins 5 A’s 4
With the Yankees eliminated, the A's seemed to have a clear path to the World Series, provided they could eliminate the upstart Twins. In Game 5, the Twins jumped off to an early 2-0 lead that Oakland's Ray Durham cut to 2-1 with a homer.

The score stayed 2-1 into the 9th when A. J. Pierzynski homered and David Ortiz doubled to make the score 5-1. But the A's fought back when Mark Ellis hit a three run homer in the 9th to make it a 1 run game. However the comeback fell a run short as Ray Durham popped up to end the game and the A's best shot as a pennant.