THE DIFFERENCE BETWEEN THE YANKEES AND OTHER TEAMS 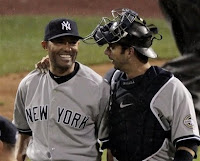 Here's something to think about...

The Yankees are about the win the World Series.

Everyone knows it, I am not jinxing anything.

Now let's take a look at two quick things. Who are the other teams that made the post season in 2009? And who are their closers?


The Cardinals won the NL Central. Their closer is Ryan Franklin. He had a blown save this playoff... albeit aided by Matt Holliday's inability to catch a flyball.

The Rockies won the NL Wild Card. Their closer is Huston Street. He blew a game that had the Rockies won, there would have been a do or die Game 5 against the Phillies.

The Twins won the AL Central. Joe Nathan is their closer. He let up a 9th inning game tying homer to A-Rod in the Division Series.

My Red Sox won the AL Wild Card. The closer is Jonathan Papelbon. And of course he blew a game where the Red Sox were one strike away from extending the series... but the Angels pulled away and won.

Those same Angels won the AL West. Brian Fuentes is their closer. He also let up a game tying homer to A-Rod in Game 2 of the ALCS. Had the Angels won that game, it could have changed the whole tone of the post season.

The Dodgers won the NL West. And Jonathan Broxton is their closer. Broxton was an out away from tying the series at 2 when he let up a back breaking walk off hit to Jimmy Rollins in Game 4 of the NLCS.

The Phillies have Brad Lidge as their closer.... and tonight he didn't blow a save but he might have done worse. He might have sunk the World Series because he couldn't get out of an inning where he had 2 outs, nobody on and 2 strikes on the hitter.

Meanwhile, the Yankees have Mariano Rivera.

And he hasn't blown a save yet this post season.

And the Yankees are on the cusp of winning the World Series in 5 and stampeding through the post season with only 3 losses.

And some people still claim he is overrated.

Some people are stupid.

I am getting tired of praising him!