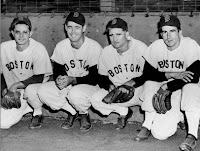 There is a terrific new blog out there that has come to my attention.

It is Four Friends All Time All Star Teams.

They are creating the best roster of players and splitting them between Pre 1950 and Post 1950.

He's doing all of the teams and so far I've loved reading about the Red Sox and Tigers rosters.

It is going to become a destination site for me and it looks like a great write up for players that don't always get praised in the blog world.

You see a lot of blogs honor Charlie Berry these days?

It is kind of similar to my Home Grown versus Acquired Series from last off season.

There are some differences. Of course I broke them up based on how they joined the team rather than eras. Also I had no time limits. You played half a season with the team? That's enough for me!

I can't imagine writing about the Red Sox and not bringing up Dave Roberts or Dave Henderson.

I can't imagine writing about the Padres without bringing up Kevin Brown or the Twins without Jack Morris.

But Four Friends have a 5 year minimum... and that means a lot of different players in his series than mine!

And it means that I am going to be looking forward to each new entry.

So check it out.

I love the internet and finding the other lunatics out there!