Seriously... Pedro Feliz was about to put his name permanently in the lore of Philadelphia sports.

2 out, 2 strike home run off of Joba Chamberlain suddenly tied the game.

Suddenly if the Phillies could keep the Yankees off the board and score a run in the 9th... they'd be tied in the series.

Cliff Lee would take the mound with a chance to give the Phillies a 3-2 series lead back to the Bronx!

And yes, we'd have ourselves a great World Series... all swung on the heroics of Pedro Feliz.

It wouldn't have been a game winning shot, just a series turning shot.

Lidge does a faceplant and now the outcome of this World Series is merely a formality.

And Feliz is reduced to a mere footnote in this series. 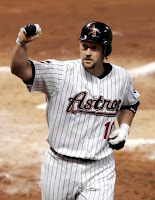 Remember in the 2005 World Series... the White Sox had a 2-0 series lead and were about to go up 3-0 in the Series? Then in the 8th inning of Game 3 with 2 outs, Jason Lane, who had already homered that game, laced a clutch game tying double... giving the Astros life.

OF COURSE YOU DON'T REMEMBER THAT!

I didn't remember that, and I am a lunatic who remembers EVERYTHING baseball!

Unless you are in the Lane family, his heroics have completely slipped your mind.

Why? Because the White Sox wound up winning that game! How the Astros tied it is irrelevant.