Fans of Sully Baseball know that I refer to Jason Varitek as "The Lobster."

It's a much better nickname than 'Tek.

Well, like Jermaine Dye's time with the White Sox, it looks like the Captain may have played his last game with the Red Sox.

It wasn't even in the playoffs as he rode the pine all three games against the Angels this October.

The Sox declined his $5 million option and now Varitek is mulling over his $3 million player option. Now I can't imagine he is going to get more than that in the open market.

But I think the Red Sox should bring him back for $5 million.

Just not as a player.

About a year ago, I dropped the suggestion of making him a player coach.

Now I want to drop the player part and just keep him as a coach.

We keep hearing about he handles pitchers well and calls a good game...
He just can't hit anymore.

Well guess what? There is a spot on Tito Francona's bench!
Brad Mills is the new manager of the Astros. He was the Red Sox bench coach.

Make Jason Varitek the bench coach!
Have him call the game from the bench. Have Victor Martinez look over for each pitch. 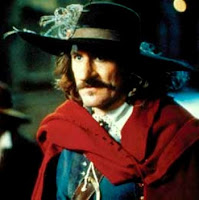 Basically Varitek will be pulling a Cyrano de Bergerac and we get the bat of Martinez and the pitching mind of Varitek.

And yeah, I think that is worth $5 million.

And they were uglier than Cyrano EVER was!