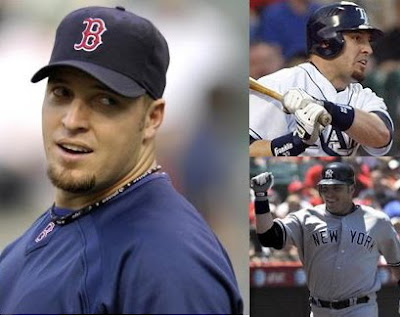 The trivia question that I posted at the beginning of the World Series was "Who is the only living person with a World Series ring as a player for both the Yankees and Red Sox?"

As of this writing, it remains Ramiro Mendoza all by his lonesome (who played in the 1998 and 1999 World Series for the Yankees and played in the 2004 post season with the Red Sox.)

Now Hinske rode the pine in the Minnesota series and was off of the ALCS roster, so I wondered if he didn't PLAY in the postseason for this year's Yankees, should he be included with Mendoza and Johnny Damon should the Yankees win.

The point is moot. He drew a walk last night and scored.

Now I hope he NEVER becomes part of that trivia question because I want the Phillies to somehow pull this one out.

But Hey! Hinske! You are already in the world of trivia... and I am not talking about how you struck out to end the 2008 World Series.

You just played in your third straight World Series with three different teams!

Only one other person has done that before and it is no dishonor to be mentioned in his company! Don Baylor, best known as an MVP for the Angels, played in the 1986 World Series for my beloved Red Sox...

Then he played in the 1987 World Series on the winning side with the Twins.

Then he was a pinch hitter and sometimes DH in the 1988 World Series.

Baylor was the emotional leader of the '86 Red Sox, establishing a kangaroo court and turning the clubhouse from a 24 player, 24 cab unit to a team that came within one strike of immortality in New England.

Baylor's contributed big time to the Twins stunning World Series run after being picked up from the Red Sox in August.

His pinch hit in Game 1 of the 1987 ALCS put the Twins up in the 8th and was the Game Winning RBI.

And in Game 6 of the 1987 World Series, with the Twins losing 5-2 in the 5th and facing elimination, Baylor hit a game tying homer off of John Tudor and the Twins would eventually win.

Baylor joined the A's mainly to give them some veteran leadership (along with another former MVP Dave Parker.) He had a disappointing season. He did drive in the final run of the 1988 ALCS that helped sink his former Red Sox teammates. His last appearance in the big leagues was a pinch hitting appearance in Game 2 of the 1988 World Series where he struck out against Orel Hershiser.

For years he was the only person to appear in three straight World Series for three different franchises.

He has company now with Hinske.