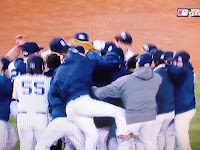 We have no ammo right now. The Yankees were better this year. This was the Yankee’s year.

Let Yankee fans gloat. I know it will be physically painful but it’s the right thing to do.

But that’s over now.

Don’t bring up payroll. Our payroll is obscene as well and the rest of baseball equates the Red Sox and Yankees anyhow.

Don’t bring up ‘roids. Yeah A-Rod and Pettitte are juicers… but so were Manny and Papi.

The Yankees won it fair and square.

We’ll get them next decade.