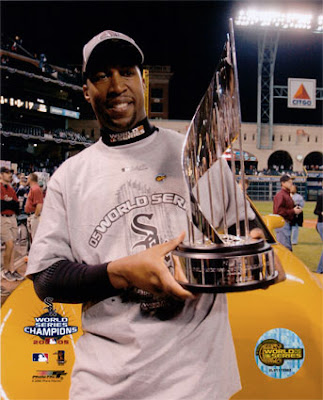 It looks like Jermaine Dye's days with the White Sox have come to an end.

Chicago declined to pick up his option and Dye goes into the winter a free agent.

He's 35 years old, had a HORRIBLE second half and the days of sluggers miraculously getting stronger in their late 30s seems to be over for some strange reason.

The White Sox need to get younger and bringing Dye back would be purely an emotional decision.

Now I am not a White Sox fan, but I have a soft spot in my heart for them. But I hope that the White Sox blogs are firing 21 gun salutes for Jermaine Dye.

In his 5 seasons in Chicago, he delivered big. An MVP caliber season in 2006. All Star numbers in 2008... and of course the World Series heroics.

His first inning homer in Game 1 of the 2005 World Series off of Roger Clemens set the tone for the series.

His phantom hit by pitch in Game 2 set up the Paul Kornerko slam.

His RBI single in Game 3 helped the White Sox come back from behind, setting up the 14 inning marathon.

And of course he drove in the only run of Game 4, singling off of Brad Lidge and gave the White Sox the title.

Think about how a Chicago pennant, let alone a World Series title, seemed so elusive.

White Sox fans who want to feel all warm and fuzzy inside should thank Dye for delivering the title that so many generations craved.

And petty White Sox fans should salute Dye for making sure a White Sox title arrived before a Cubs title. (And with the Lou Piniella era sputtering to a close, Sox fans might have that bragging right for a while longer!)

So let's see those blogs sending out love.

Jermaine Dye... get ready. Your number will be retired in Chicago before long.
(Just don't sign with the Cubs.)