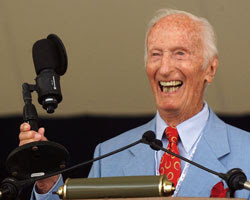 Bob Sheppard, the voice of Yankee Stadium, is retiring.

He's 99 years old... the fact that they have to announce that he is retiring and explain why he won't be able to even do one game next year says a lot about him.

Most people when they reach 99 years old have been dead for about 20 years.

But Sheppard is alive and does a job that seems to be essential... he gives class and dignity to announcing the Yankee line up.

That's stretching over some serious time.

He was featured in Seinfeld, Anger Management and was the final voice over in Billy Crystal's surprisingly good 61*.

And yes, while I am a Red Sox fan, I admit I got chills when I heard his voice.

And let me tell you, when I was at NYU in the early 1990s and the Yankees were awful, he made some of those names sound good.

Any chump can say Mickey Mantle or Thurman Munson... but to make Oscar Azocar sound like a great Yankee took some talent.

So give yourself a break... and I hope Bob Sheppard reaches well beyond 100 years.

God should take that as a compliment!