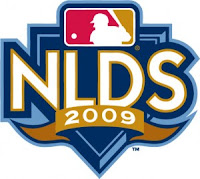 The National League may not have had a marquee franchise like the Yankees or Red Sox this decade, but they certainly had their share of drama in the post season.

From walk off homers to outrageous plays at the plate... from memorable pitchers duels to dropped fly balls and the first post season celebration for the Cubs since 1908... the National League Division Series had its share of memorable moments in the 2000s.

But a note to my dad: There are quite a few games listed here that were heart breakers for Giants fans. You've been warned.

And a few honorable mentions when need be.

Morris was terrific, holding the Diamondbacks to 6 hits and 1 run over 7 innings. His only blemish was a 2 out RBI single in the 5th inning.

This night, that was all Schilling needed. He went the distance, letting up only 3 hits and one walk while striking out 9. Schilling gave Arizona the early lead and a glimpse of the great pitching to come the rest of the post season.

The underdog Dodgers wanted to be aggressive early to make a stand against the heavily favored Mets. They showed their fearlessness on the bases when Jeff Kent tried to score from second on a Russell Martin single.

He was thrown out at home.

But then the aggressiveness got surreal when J. D. Drew tried to score on the same play. Mets catcher Paul LoDuca already had the ball and he got them both in one of the strangest double plays in history.

The game was a back and forth affair with the Dodgers scoring first, the Mets taking the lead, the Dodgers tying it late until the Mets took the lead for good on Carlos Delgado's RBI single.

When the Dodgers lost by one, you had to wonder how the game could have unfolded differently had Kent AND Drew hadn't tried to score early in the game.

Honorable mentions for
Game 1 of the National League Division Series
2001 – Braves 7 Astros 4
The Astros took a lead into the 8th inning but Marcus Giles tied the game with a single off of Mike Jackson. Two batters later, Chipper Jones launched a three run homer to give Atlanta the lead for good.

2007 – Diamondbacks 3 Cubs 1
Brandon Webb and Carlos Zambrano were locked in a tense 1-1 pitchers duel through 6 innings. Then Lou Piniella made one of the strangest managerial moves in recent memory. He pulled Zambrano after 6 innings and only 85 pitches, supposedly to make sure he was fresh for Game 4.

The plan blew up in Sweet Lou's face as reliever Carlos Marmol let up a lead off homer to Mark Reynolds and let up an insurance run later in the inning.

The Diamondbacks swept the Cubs and Zambrano was well rested for spring training. 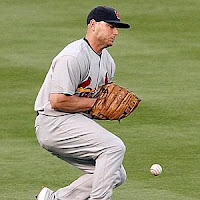 The Cardinals were picked by many to go all the way to the World Series on the strength of their two aces, Chris Carpenter and Adam Wainwright. The Dodgers won game 1 but Wainwright dominated Game 2, with a little help from a home run by Matt Holliday.

In the 9th with 2 outs, closer Ryan Franklin got James Loney to fly out to Matt Holliday to end the game... except of course Holliday dropped the ball.

Now if Franklin got either of the next two batters (Casey Blake and Ronnie Belliard) out, then Holliday's dropped fly ball would have been laughed off.

Instead the Dodgers rallied with Belliard tying the game with a single and pincher hitter Mark Loretta delivered the walk off hit.

The demoralized Cardnals were swept a few days later.

Down 0-1 in the series, the Mets handed Armando Benitez a three run 9th inning lead in Game 2. You would think that would be a big enough lead.

Bonds and Kent got on and with one out J. T. Snow hit a three run game tying homer that sent Pac Bell Park into delirium.

The joy was short lived as the Mets came right back in the 10th with Jay Payton's 2 out RBI single.

When Benitez again let the lead off man on, John Franco was called in. With two outs and a runner on, Franco got Bonds on a questionable called third strike to end the game.

Honorable mentions for Game 2 National League Division Series
2002 – Cardinals 2 Diamondbacks 1
Curt Schilling was terrific against the Cardinals but Arizona trailed 1-0 into the 8th inning. Quinton McCracken doubled home the tying run with 2 outs in the 8th to get Schilling off the hook. But Miguel Cairo hit an RBI single in the 9th to give the Cardinals the win and a 2-0 series lead.

2004 – Braves 4 Astros 2 (11 innings)
Roy Oswalt had the lead over former teammate Mike Hampton but Brad Lidge let up a game tying RBI double to Adam LaRoche in the 8th inning. John Smoltz worked around a pair of walks in the 10th and Rafael Furcal ended the game with a 2 out 2 run walk off homer in the 11th. 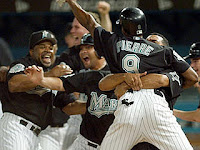 The Giants and the Marlins both blew several scoring chances throughout Game 3, allowing the game to go into extra innings.

Marquis Grissom was caught trying to steal third base.

Lenny Harris of the Marlins popped up to end the 10th with the bases loaded.

The Giants broke the tie with a run in the 11th but left the bases loaded.

In the bottom of the 11th, supposed Gold Glove right fielder Jose Cruz Jr dropped an easy fly ball by Jeff Conine to lead off the inning. Eventually the Marlins loaded the bases with two outs. With 2 strikes, Pudge Rodriguez singled home the tying and winning runs.

The Giants were 4 outs away from taking a 2-1 series lead. But Edgardo Alfonzo doubled home the tying run in the 8th inning off of Robb Nen, sending the second straight game into extra innings.

The Giants blew scoring opportunities in the 10th, the 12th and the 13th while the Mets blew a bases loaded chance in the 11th.

Finally Benny Agbayani homered in the 13th inning to give the Mets the win. They would win the series the next day on Bobby Jones' 1 hitter.

Honorable mentions for Game 3 National League Division Series
2007 – Rockies 2 Phillies 1
An unlikely pitchers duel unfolded at Coors Field between Ubaldo Jimenez of the Rockies and Jamie Moyer of the Phillies. The Rockies took a 1-0 lead into the 7th before Shane Victorino homered to tie the game and keep the Phillies hope alive. But Jeff Baker hit a 2 out RBI single in the bottom of the 8th to give Colorado the lead.

The Rockies would shut Philadelphia down in the 9th and keep their unlikely winning streak going into the NLCS.

2009 – Phillies 6 Rockies 5
A wild back and forth game saw the two teams tied going into the 9th. A controversial non call helped put Phillies on first and third with only 1 out, setting up Ryan Howard's go ahead sacrifice fly.

Charlie Manuel brought in struggling closer Brad Lidge who proceeded to put the tying and winning runs on base before getting Troy Tulowitski to pop up and end the game.

One of the great Division Series games of all time.

Early on it looked like the Braves were going to cruise to an easy win and force a Game 5 in Atlanta. Adam LaRoche hit a grand slam and the Braves took a 6-1 lead into the 8th inning.

But Lance Berkman hit a grand slam off of Kyle Farnsworth to bring Houston to within 1.

Then Brad Ausmus hit a 2 out game tying homer in the bottom of the 9th to send the game into extra innings.

Actually, it would take the equivalent of another GAME to decide this one.

The Astros ran out of pinch hitters and Roger Clemens had to come in as a pinch hitter AND a reliever. 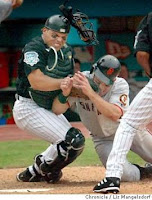 The Giants seemed demoralized after their shocking Game 3 loss and quickly fell behind 5-1 in Game 4. Dontrelle Willis was dominating with his arm and with a 3 for 3 performance at the plate.

But the Giants tied the game with a 4 run 6th inning.

After listening to that game, I drove to my wedding.

Honorable mentions for Game 4 National League Division Series
2004 – Braves 6 Astros 5
The Astros scored 5 in the second inning and looked like they were going to cruise to their first ever post season series win.

But Adam LaRoche hit a three run homer in the 6th to tie the game. Astros manager Phil Garner made a pair of strange managerial decisions including lifting Roger Clemens after only 5 innings and pulling Brad Lidge after only 2 batters. The Braves rallied with 2 outs in the 9th to take the lead on J. D. Drew's single.

With the series winning runs on board for Houston, Smoltz got Jeff Kent to hit into a game ending double play.

2009 – Phillies 5 Rockies 4
Cliff Lee, who threw a devastating complete game victory in Game 1, had the Rockies on the ropes going into the 8th inning. But a walk and an error in the 8th knocked him out and Ryan Madson allowed the Rockies to take the lead.

With 2 outs in the 9th and the Rockies in line to tie the series, Ryan Howard hit a game tying double and Jayson Werth singled him home.

Reliever Scott Eyre put the tying and winning runs aboard for the Rockies, but Brad Lidge got Troy Tulowitski out again to clinch the series. 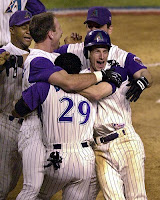 Possibly the most underrated game of the decade.

The Schilling vs. Morris rematch looked like it was going to be a repeat of Game 1 as Schilling took a 1-0 lead into the 8th inning. But J. D. Drew homered to deadlock the game and send the decisive game tied into the 9th.

Schilling worked around an Edmonds single in the 9th and the D'Backs looked to end the series in the bottom of the 9th.

With 1 out and pinch runner Midre Cummings at third, manager Bob Brenly called for a squeeze play to end the series. But Tony Womack couldn't put the bat on the ball and Cummings was out at home.

Womack made up for it by getting an RBI single scoring Danny Bautista and winning the series.

The Giants avoided elimination in Game 4 and took a lead in the decisive Game 5 thanks in part to a Barry Bonds home run.

But the Braves kept threatening and in the bottom of the ninth had the tying runs aboard, nobody out and Gary Sheffield and Chipper Jones coming up.

One swing of the bat and the Braves would win the series.

But Robb Nen struck out Sheffield and got Jones to ground into an awkward but effective double play that ended the game and won the series for the Giants.

(I needed to have ONE good Giants game in here!)

Honorable mentions for Game 5 National League Division Series
2003 – Cubs 5 Braves 1
After a pair of back and forth games at Wrigley, the Braves and Cubs played a winner take all Game 5 in Atlanta.

Behind Kerry Wood, the Cubs shut the Braves offense down to a single run over 8 innings. The Cubs sent Atlanta down 1-2-3 in the 9th.

It is, as of this writing, the only post season series victory of any kind for the Cubs since 1908.

2004 – Astros 12 Braves 3
The Braves and Astros went into the 7th inning of the deciding Game 5 with the score a tight 4-2 in Houston's favor. Then the Braves bullpen collapsed as the Astros scored 5 in the 7th and 3 in the 8th to cruise to a 12-3 victory. This was the first playoff series win in Houston's history.