No offense to Hideki Matsui... but Mariano Rivera was the MVP 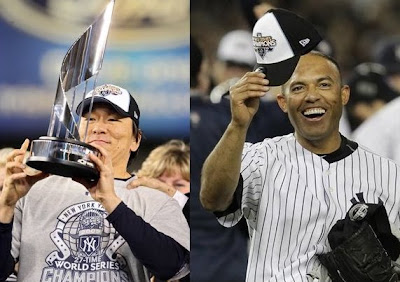 Nobody is denying Hideki Matsui had a great Game 6 of the World Series. Heck he drove in 6 runs by himself.

His two run homer off of Pedro Martinez got the scoring started... and when the Phillies answered with a run of their own, Matsui got the 2 out 2 run single that made it clear the Yankees weren't getting caught.

I still don't think he was the MVP of the World Series.

It's not a bad choice. Picking Phil Hughes would have been bad.

He wasn't the MVP of the World Series.

Not to be harsh, but in a 6 game Series, the MVP should probably start more than half the games. (Not always... Dusty Rhodes should have been the MVP of the 1954 World Series... but I digress)

In this post season, every single closer blew a must win game for their team...
except one.

In this World Series, the mantra for both teams was get into their vulnerable bullpen. As Hughes and Chamberlain became less and less reliable, the Phillies would be licking their chops when Girardi pulled the starter.

EXCEPT for one pitcher.

The Phillies went into the later part of the Series not sure who would even pitch the 9th.

And yet basically their strategy seemed to be "Make sure Mariano Rivera doesn't pitch."

If Rivera pitched, the game was over.

That's kinda sorta a cut and dry definition of a Series MVP.

I said this to my dad last night and he replied "Yeah, but doesn't Rivera already have one?"

I'm sure Rivera isn't losing sleep over this and Matsui has been a great Yankee and it is easy to forget that this is his first World Series ring (doesn't it seem like he belongs with the Riveras, Posadas, Jeters and Pettittes as guys who have won a few?)

But when Rivera came out in the 8th, the roar of the crowd was that of people who knew the game (and the World Series title) was theirs.

Because Rivera, the most valuable player of the series, was in the game.