The decade turns to Joe Blanton for salvation 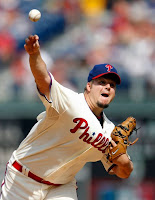 This hasn't been a banner decade for the World Series.

There has only been one great one this decade... the 2001 World Series which was jaw dropping, heart breaking and leap off the couch exciting depending on your opinion of the Yankees.

The 2002 Series was back and forth right down to the 7th game and broke my dad's heart as the Angels (then in Anaheim before their move to Los Angeles of Anaheim) beat the Giants.

And in 2003, the Marlins stunned the Yankees in an exciting 6 game series.

Since then, we haven't had a heart stopping series.

Yeah each game in 2005 was competitive and 3 of them were truly wonderful... but again it was a sweep.

The only thing merciful about the 2006 World Series was that it was over quickly.

Last year the Rays and Phillies fought hard, but again, it never went back to the original host city.

So that means the last 5 World Series were all but decided after 4 games.

Now CC Sabathia, who has been awesome in the post season and didn't pitch badly in Game 1 is throwing against Joe Blanton, whose ERA against the Yankees has an area code.

Blanton and the Phillies have to come up big, somehow hit Sabathia and shut down the Yankees bats, otherwise the decade will conclude with 5 straight World Series that failed to have that "man this is coming down to the wire moment."

I know the odds are long, but what were the odds that you'd homer in last year's World Series?