Yeah, I watched women’s curling with other people at the office today. And I don’t apologize for it either.

It was awesome. Me and my other office mates were hooked.

Yeah it is basically shuffle board on ice.

Sure, it was probably started by a couple of drunk people who brought a big rock and some brooms to a frozen pond and now people can call themselves Gold Medal Olympians based on their sweeping abilities.

But I guess the beauty of the Olympics is getting hooked on sports that you would never have noticed. 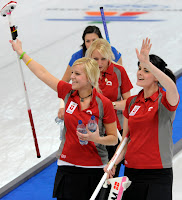 Oh, and speaking of beauty did you SEE the women curlers?

I had no idea curling had any sex appeal, but it does. 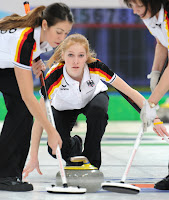 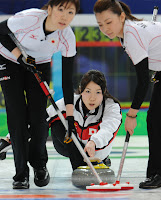 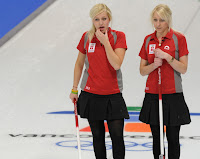 These two from the Danish team who could be twins?

Look, far be it for to tell NBC how to cover the Olympics… but in 2014 when the Winter Olympics head to Sochi, Russia… play up the Women’s Curling a little.

I should note that the most beautiful woman I associate with curling is actually my wife.

On our first date, we met at Kettle of Fish, a bar in Greenwich Village. When we met, the TV was on showing a curling match at the 2002 Salt Lake City Olympics.

So forgive me for romanticizing curling.