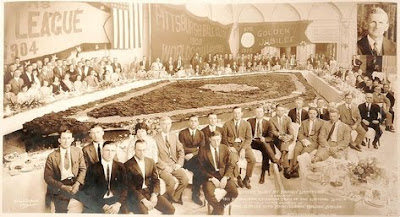 I am looking for a picture of a baseball hero.
I think his face is in the group picture above.

But I am looking for a close up.

I can find many pictures on the internet. I am sure if I searched long and hard enough, I could find a picture of me writing this very blog post somewhere.

But what I CAN’T find is a picture of someone who has quickly become one of my favorite obscure figures in baseball history.

I mentioned him in my Home Grown vs. Acquired Series in the Pirates Entry.

I mentioned him in my Most Unlikely Pitchers to Clinch a World Series Entry.

He clinched one of the greatest moments in Pittsburgh Pirates history.

He had a highlight that some of the top relievers in baseball history never had: Saving the 7th game of the World Series.

He was the first person to ever clinch a series when the team was down 3-1.

His team pulled off an amazing upset and in order to finish off the series, this pitcher needed to face three future Hall of Famers. He got them out 1-2-3.

Less than a year later, he was gone from the bigs for good.

The player's name is Red Oldham.

He was a career minor leaguer with stops here and there... and was entrusted by Pirates manager Bill McKechnie to come into Game 7 of the 1925 World Series and protect a 2 run lead.

The Pirates had just rallied off of Walter Johnson of all people... and Oldham had to face Sam Rice, Bucky Harris and Goose Goslin... all future Hall of Famers.

He got all three out to clinch the World Series. He lived out my childhood fantasy of being the obscure pitcher called in to close out the Series (Mike Timlin did as well in 1992.)

I am sure he is in the picture above which was taken at a dinner to honor the World Champion Pirates.

And I know he exists in the photo below. 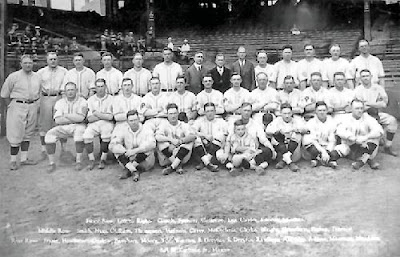 This is the World Series team picture and with close enough inspection I see one of the names is "Oldham."

So folks... here is the only picture of Red Oldham on the internet.

There must be more info.
He must have descendants or family.

If anyone has info, pictures or and point of Red Oldham interest... please please PLEASE e mail me at info@sullybaseball.com

Today there would be pictures of him all over Pittsburgh striking out Goslin to clinch the series.

But now all I have is a picture zoomed in and cropped on iPhoto.

Red deserves better online.
And I am going to make sure he is better represented in cyber space.