Tiger didn't owe me an apology, nor you 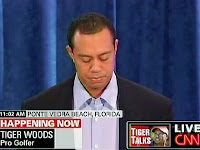 Yup, Tiger Woods apologized in public and all the world stopped to listen.

I loved the CNN caption. They felt the need to put the subtitle "Pro Golfer."

Is that for the 2 people on the planet Earth who have never heard of Tiger Woods?

I think it was written by a sarcastic news producer at CNN... as if to say "Yes, we are stopping all reporting in the world to tell you a golfer cheated on his wife."

Now I am sure he meant it when he said he was sorry.
And if you thought his wife was p*ssed at him, you should have seen his mom.

I found it refreshing that he didn't try to blame the media or make him a victim. Roger Clemens, Barry Bonds and Mark McGwire should take note.

And of course the nanosecond he wins a golf tournament, all will be forgotten. Don't believe me? look how quickly A-Rod went from womanizing steroid using albatross to beloved World Champion.

But Tiger didn't owe me an apology. I'm not a big golf fan, but I love watching him play. The only apology he owes ME is if he doesn't ever play again and golf goes back to being populated by a bunch of 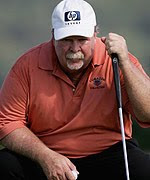 Now of course he owes his wife an apology.

He owes his kids an apology.

He owes the person whose tree he hit an apology.

And he owes his sponsors an apology. Seriously, Buick and Gilette and all of the other companies that poured tens of millions of dollars into his available balance weren't paying for a golfer. They were paying for an image... an image of coolness and someone who can never be rattled.

Although I find the whole endorsement thing to be a bit silly. If I am weighing the pros and cons of buying a car, I'm not going to think "How did Tiger do in the U. S. Open?"

But I did think that Tiger picked the wrong decade to be the dominating sports figure of his era.

Let's just for a moment, imagine a baseball player who is damn good.

No, better than that. Like Tiger Woods, becomes larger than the sport, smashing the record books in more ways than seems possible.

He is the highest paid player, the biggest star and does the most endorsements.

Now let's also imagine that he has such a drinking problem that he had to have a clause in his contract that he would knock off the booze.

Imagine that he fought with management and managers. Imagine that he was suspended to start one season and his hard drinking and bad eating lifestyle caused him to miss much of another.

Imagine that player throwing dirt and an umpire and climbing into the stands to confront a fan.

Imagine if that player was caught stealing in the bottom of the 9th of a 1 run Game 7 of the World Series... and that bone headed decision ended the series.

Imagine if that player ran around with women (and frequented brothels) while he had a wife and child living in another town.

And eventually that woman he was married to died in a fire.

Can you imagine the scrutiny a player like that would have endured? 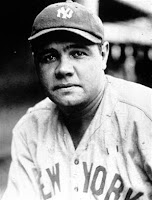 That would be Babe Ruth...

He'd have be considered bad for the game today.

He'd have people wringing their hands that kids want to emulate him.

He etched his name into the record books as a hitter and a pitcher... and today he'd also set unbreakable records in number of press conferences where he breaks down.

Remember how people treated Robbie Alomar spitting at John Herschbeck as if it were the end of civilization?

Or Ron Artest's going into the stands in Auburn Hills being an event tantamount to the Hindenberg disaster?

Or Michael Irvin's partying? Or Wade Boggs' affair? All earth shattering. Well Ruth did it all... and to this day remains a figure that towers over the sport.

He represents a supposedly more innocent time... a time when reporters kept quiet when you returned from a brothel smelling like booze.

Is it better now where anyone with a camera phone and a Twitter account can bring someone down?

Was it better then when myths were created and some unpleasantness suppressed?

I am not sure. But I DO know it is better now that our star athletes can't endorse tobacco anymore. 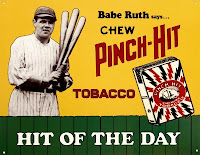