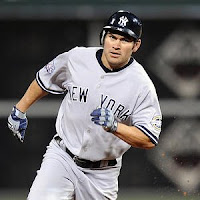 Now color me as someone who never thought of Johnny Damon as a Hall of Famer. He’s a terrific player and a champion, but not an immortal.

He had statistically three elite seasons, was never among the best in on base percentage and wasn’t exactly a Gold Glove winner.

Yes, he had guts, played hurt, had some big post season moments and would literally crash into walls for his team.

Heck, a team of 25 guys who played as hard as Johnny Damon would be invincible.

You could say the same about Paul O’Neill and he doesn’t belong in the Hall of Fame either.

But I tip my cap to friend of Sully Baseball, Brad Templeman. In his (great) blog Baseball in Depth he makes the case for Damon as a Hall of Famer. Granted it is in one category… but it is a big one.

Scoring runs is kinda sorta important. And yes, it relies on other people knocking him in… but if you score 1,500 runs over a career, you can’t chalk it all up to luck.

Damon needs to score 17 runs this year to join the 48 players in history to score 1,500 times.

The three who aren’t are Robbie Alomar (who will be in the Hall next year), Tim Raines (who should be in the Hall of Fame) and Pete Rose (Christ Pete… why didn’t you stick to betting on the ponies!)

And the 10 who are either active or not Hall of Fame eligible yet, they include sure fire Hall of Famers (Derek Jeter, Ken Griffey Jr, Craig Biggio, Jeff Bagwell) juicers (Barry Bonds, Alex Rodriguez, Manny Ramirez, Rafael Palmeiro, Gary Sheffield) and Kenny Lofton.

Pretty good company (and no doubt a good case will be made for Kenny Lofton as well someday.)

But if he does get in, there is a more intriguing question: 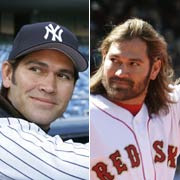 Which hat does he wear?

Seriously, the Hall of Fame decides these things and sometimes it goes against the wishes of the player.

Andre Dawson wanted to go in as a Cub, but he’ll have an Expos cap.

Gary Carter is also enshrined as an Expo, even though he wanted to have a Mets cap on.

But knowing the Hall of Fame, they’ll just look at which team he played the longest for and slap that logo on the plaque.

So folks, if he gets elected, I am predicting he’ll go in as a Royal.

That’s a good compromise I think.