The only players I am POSITIVE are clean of steroids 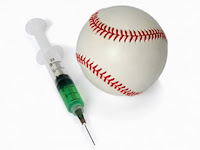 Over the last few years, I think we all have our guard up regarding players getting caught doing PEDS.

If I heard anyone did them, I’d probably shrug and say “Yeah… I thought so.”

At this point there are only three players that I can think of that would stun me if they got caught with ‘roids.

Mariano Rivera would stun me.

Derek Jeter would stun me. (And remember this is coming from a Red Sox fan.)

Ichiro would stun me.

And Julio Lugo would stun me… mainly because he’s skinny and he sucks.