He played for several teams over his 12 year career, but none that means as much to me as the 1979 Pirates.

As anyone who has read this blog knows I have a huge spot in my hear for the 1979 We Are Family Pirates as they won the first World Series I have any memory of.

Jim Bibby started Game 7 of that World Series… yes the same game I gushed about this off season.

So in his honor, let’s list a few things about Bibby.

Bibby was originally a Met farm hand but never played in Flushing.

In yet another brilliant move by the Mets in the mid 1970s, Bibby was sent packing along with Art Shamsky and 2 others to St. Louis.

None of the players picked up by the Mets (Jim Beauchamp, Chip Coulter, Harry Parker nor Chuck Taylor) did squat with the Mets.

He threw the first no hitter in Texas Rangers history on July 30th, 1973.

He pitched it against the Oakland A’s, who were in the middle of three straight World Series titles.

The start prior to his no hitter, he threw a complete game 2 hitter against the Angels.

He out pitched Nolan Ryan, who would know a few things throwing no hitters in a Rangers uniform.

So in two starts he pitched 18 innings and let up 2 hits. 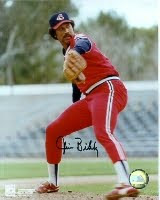 He pitched in the burgundy unis of the 1970s Indians… and the all yellow unis that the Pirates wore in the late 70s.

He made those ugly uniforms look good.

Jim was an All Star

Jim played in his lone All Star in 1980 at Dodger Stadium as a member of the Pirates.

He came into the game in the 7th inning with a 1 run led and got future Hall of Famer Robin Yount to fly out.

Willie Randolph then singled but Cecil Cooper grounded into a double play to end the inning.

Bibby was credited with a Hold. Actually he wasn’t. There were no “holds” back in 1980. But Baseball Reference gave him one retroactively.

1980 was Bibby’s best season. He won 19 games, tying his career high and finished the season with the best winning percentage based on his 19-6 record.

Jim was a Terry Harper single away from perfection

On May 19,1981 he led up a lead off single in the first inning to Atlanta’s Terry Harper.

He went on to retire the next 27 batters for the 5-0 complete game hitter. 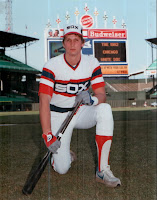 The last batter he faced was Greg Walker

Bibby finished his career on May 26th, 1984 doing a mop up relief appearance for the Rangers against the White Sox.

The White Sox loaded the bases on him with one out, but he got Mike Squires and Greg Walker to pop up and he escaped the game (and his career) with no further damage,

Unlike his Uncle Jim, Mike never could get that ring. 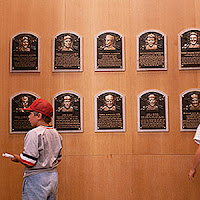 Bibby appeared on the 1990 Hall of Fame ballot. He received one vote.

I'm not saying he deserved a Hall of Fame vote... but I wonder who that one voter was.

And if that one voter is still alive, I hope the Bibby family invites him over for dinner. 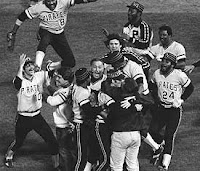