I needed photographic evidence to believe it 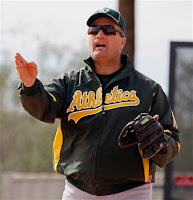 But yup... Bob Geren is indeed still the manager of the Oakland A's.

How does he still have a job?

Is it really the whole "he's buddies with Billy Beane" excuse?

But he is starting his 4th season... and under his stewardship, the A's, a team that made the ALCS just prior to his arrival and constantly put a contender on the field even with a low budget and free agent defections, have been a consistent sub .500 non contender in his 3 years.

And worse than not contending, they've been flat, boring and irrelevant... even in the Bay Area.

I called for his head last year (as did every A's fan I know.) But then again, I thought Charlie Manuel was dead wood before 2007... so who knows? Maybe the A's, like their former city mates the Phillies, will rattle off three straight division titles, two straight pennants and a World Series title.

The Angels have taken a step back this year and the west is winnable (didn't I say that LAST year?)

But if the A's come out stumbling this year, there is no excuse... even for Billy Beane's best buddy. (say that three times fast.)