Olympic Hockey is everything the WBC wants to be... but can never acheive 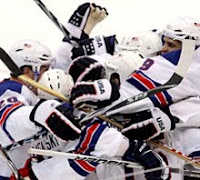 How big was today's win in Vancouver by team USA over the Canadian hockey team?

My wife, who is hardly a hockey fan, read that and said "Wow!"

And it was indeed a wow. A tense game which Red Wing Brian Rafalski playing for Team USA became the offensive hero.

Caps star Alexander Ovechkin plays for the Russian team as does Evgeni Nabokov of my San Jose Sharks.

And those are just a few of the NHL stars that this casual hockey fan recognizes.

The biggest names are on the ice... and they are playing full speed. The intensity of today's game was enormous and it wasn't even a medal game!

I wonder if Bud Selig was watching. I am guessing he was. I am sure he looks at this and says "Why can't the World Baseball Classic be more like this?"

And sure, it would be great to see an American team filled with all of the American superstars...

And a Domincan team playing at full strength and full speed.

And a Venezuelan team playing one brand of baseball while a Japanese team plays a different kind.

But this is just one thing hockey will have over baseball.

Remember how the WBC actually unfolded: Many star players saying "thanks but no thanks." Stadiums 2/3 empty. Indifferent fans. And with the exception of Ichiro, all of the marquee superstars mercifully back with their teams by the finals.

And lest we forget the level of play! Pitch counts. Players going at half speed. Pitchers "trying to get their work in" during potential elimination games.

The Olympic medal actually means something, unlike the WBC trophy (which I am dubbing the "Selig Cup.")

Be thankful hockey fans that you get a tournament like this. It is unique. It is special.

And it ain't happening in baseball.