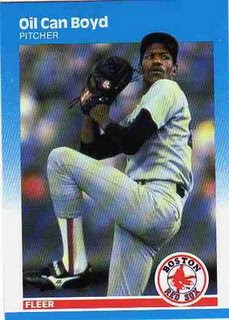 I called up my cousin Dave the other day during the A-Rod press conference to assure him that I would not throw him under the bus if I ever were involved in a steroid scandal.

He asked me if I had heard about Oil Can Boyd... which I hadn't. But any non steroid news would be welcome, especially about one of my favorite players from the 1980s.

Well the Can is trying a comeback.
He hasn't pitched in a big league game since getting lit up on October 1, 1991 while pitching for the Rangers, but he wants back in.

And the staff at Sully Baseball thinks he should get a chance!

1) He's been playing in the minor leagues... granted the independent Brockton Rocks but it's not like he's been just sitting on his La-Z boy since the first George Bush was in office.

2) Current batters haven't seen him. Hell, in this year's draft there will be some kids in the first round who weren't even born when he threw his last pitch.

3) Baseball needs a renaissance of nicknames, and few ones were as cool as "Oil Can."

4) Pitching is bad enough on so many teams that how could a flier on the Can be any worse? The Pirates signed two kids from India who have never played baseball before but won a reality show. Kind of like The Rookie meets Slumdog Millionaire.

How could bringing the Can back be worse than making the baseball equivalent of Sanjaya a shot?

6) Oil Can's hero is Satchel Paige. The fact that Paige was only one year younger than Oil Can is now when he made his debut with the Indians is part of Oil Can's inspiration. And playing a game of Six Degrees of Separation would bring a lot of today's players closer to Satchel.

Satchel started pitching in the 1920s and dominated through the 1930s and early 1940s. He was denied the chance to stare down Babe Ruth, Lou Gehrig, Jimmie Foxx, Mel Ott and all of the other stars at that time.

He was brought out of retirement in 1965 to pitch a game on the last home stand of the year for the Kansas City A's.
Despite being 58 at the time, he pitched three scoreless innings against the Red Sox... letting up only one hit: A double to Carl Yastrzemski.

When Yastrzemski, the last major leaguer to get a hit off of Paige, retired in 1983, one of his teammates was Oil Can Boyd.

That's a pretty short connection. Let's have that connection continue to today's players!

7) Wouldn't Oil Can getting one more shot be a welcome relief from all of this steroid talk? Wouldn't it be great to bring back a guy who loved the game and was one of the great characters... at least to give him a shot!


So come on! There are 30 teams out there and ALL of them need another arm.

Bring back the Can!