No, spit balls are not the same as steroids 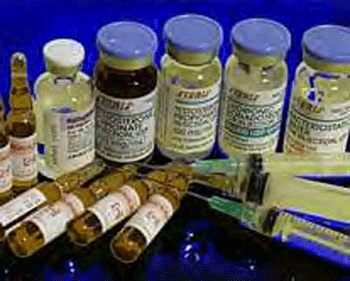 I have a quick note to steroid apologists...
Yes, I realize there is a tradition of cheating in baseball.

I know some well known cheats are in the Hall of Fame!

I lived in the Bay Area during the joyless Bonds home run chase and callers into KNBR would say "How is this different than Gaylord Perry and his spit ball?"

Now people are bringing that analogy back (and scuffed balls, corked bats and Mickey Mantle being drunk.)

OK, let me tell you the difference. Possession and use of these steroids are ILLEGAL!

Look, when Joe Niekro got caught with an emery board in his pocket during a game, he got ejected.

But if a cop caught him with an emery board, he can't even issue him a ticket.

If Gaylord Perry got caught throwing a spit ball, he'd get tossed.

But outside the ballpark he could lick a baseball in broad daylight and drool all over it and have it drip with saliva.
Would it be illegal?

Nope.
It would be gross but within the boundaries of the law.

If I was caught purchasing or using one of these steroids in question... I could get arrested.

It's that crossing the boundaries of the laws of the United States of America that make it a little dicey.

As for Mickey's boozing, it would a stretch to claim alcohol was a performance ENHANCING drug.


One knucklehead called up XM Home Plate last night and said "What's the difference between steroids and getting a cortisone shot?" And later added "If your arm is tired, then you shouldn't be pitching."

Not only is that pretty tough (and I wouldn't want to be HIS son) but also fails to address one critical difference:

A cortisone shot is delivered by a doctor in a hospital... not in a bathroom stall by Alex Rodriguez's cousin.

See the difference?
It's subtle.