Is it too much to ask for a REAL apology from a steroid user? 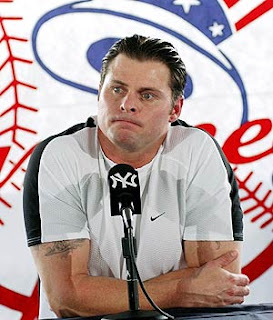 I'm sick of people like Andy Pettite and Alex Rodriguez and Jason Giambi being applauded for coming out and being honest about their steroid use.

They lied and they were caught.

When I was in the 7th grade, I lied to my parents. I told them I was doing my homework.

Then a letter came from the Weston Middle School saying "Paul has not been turning in his homework."

I saw it in the mail.

I threw it away.

When I said "Yes I did both" my parents did not respond by saying "Hey! You were honest about it."
TRUST ME!

It's the same with these guys.

Admitting something after you were caught doing it isn't admirable. It's a tactical retreat (as opposed to the insane denial of some others.)

I want a real apology from a 'roids user right now.
And I want it from someone that there's been NO WHISPER about up until this point.

I want someone to come up and say

"HEY! Senator Mitchell never found my name, I never went to BALCO and I was never a teammate of Jose Canseco... but I used steroids and I am admitting it."

And when asked How long? I want him to respond

"For most of my career! Because I wanted to stay in the big leagues, I saw everyone doing it and I felt I need to do this to compete."

When asked "Did you know what it was?" I want to the answer to be

"YES! Good God I am an athlete! I needed to know what I was injecting. I knew what it was, how it would help me."

And when asked "Were other teammates using it?" I want the response to be

And finally he'd be asked "If you weren't going to be caught, then why are you admitting it?" the correct response should be

That would be refreshing.

I lived down the throwing away the note from school... but it took a while.