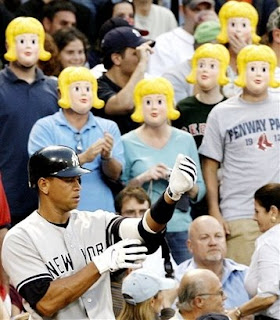 There are 103 other names on that supposedly sealed group of positive tests.

And chances are some Red Sox that WE really love!

So when you boo A-Roid this year, be prepared for some of the members of our beloved 2004 squad to have their names dragged into it.

And also there are so many other reasons to boo A-Rod.
Let's focus on him being an overpaid, wife cheating, Arroyo wrist slapping, Ringless big game choke artist!