Why not meet Ray Durham in St. Louis? 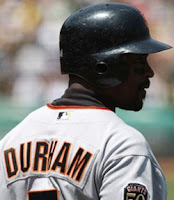 I was always tempted to say "No, I'm not selling... but there's a guy right over there you should talk to!"

I have the same temptation to call the St. Louis Cardinals and Ray Durham.


Ray Durham is mulling retirement because he has no offers...

And the St. Louis Cardinals are going to try and convert Skip Schumacker into a second baseman.

Durham is no longer an All Star, but he's a solid veteran who hit nearly .290 last year, has post season experience (including last season) and is only a few seasons removed from a 26 homers, 93 RBI, .293 average and .898 OPS season.

And the Cardinals literally ran out of second basemen after running Adam Kennedy out of town.

Shouldn't this be a "Two Great Tastes that Go Great Together" Reeses Peanut Butter Cup moment?

There MUST be a competent infielder in the Cardinals farm system that they can groom at AAA while Durham holds the spot steady for a year. Meanwhile the Cardinals make another playoff run.

And we're not talking about a Manny Ramirez contract here. It's between this and playing shuffleboard.

What am I missing here?

Are they both scalpers?