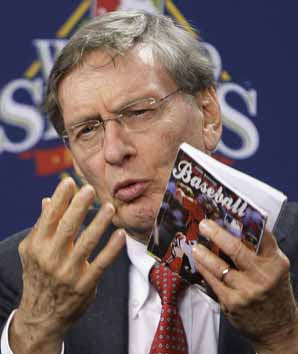 When I heard Bud Selig call someone else out on shaming the game of baseball, i came down with what is known as Exploding Head Syndrome.

Bud Selig complaining about someone shaming the game is like Amy Winehouse criticizing someone's health habits.

This is the same Bud Selig who was...

- One of the cabal of owners who ousted Fay Vincent and put a small market owner in the role of commissioner (no conflict of interest there.)

- The only commissioner to have the World Series, which was played through 2 World Wars, a Depression, Vietnam and the 1989 San Francisco Earthquake, cancelled.

- The commissioner who oversaw reckless expansion in the 1990s to pay off the collusion fines.

- The commissioner who looked the other way when players suddenly started looking like Lou Ferrigno, even though reports of steroid use by Canseco and McGwire were rumored in the 1980s (and a topic during the broadcast of the 1988 World Series.)

- The commissioner who saw the brightest hour that baseball had in a generation, the wonderful post September 11th World Series in 2001, and threw cold water on the celebration by announcing his plan to contract franchises. (Maybe if you hadn't colluded in the 1980s, you wouldn't have to expand in the 1990s and threaten to contract in the 2000s!)

- The commissioner who couldn't come up with a solution to finish the 2002 All Star Game. How about a Home Run Derby or something? If I wanted to see something great have a unsatisfying sudden ending, I'd pop in Saving Private Ryan.

- The commissioner who looked clueless in front of congress during the steroid hearings. (Although truth be told, Selig looks clueless when he says "Hi, my name is Bud Selig."

- The commissioner who didn't think to check the weather report before Game 5 of the 2008 World Series. He may have seen the Dopler was calling for a tsunami. And maybe the first 6 innings of a potential clinching World Series game wouldn't have been played in what looked like quicksand.

- The commissioner who on that same game pulled the tarp out almost as soon as the Rays tied the game and somehow tried to make us think that was a coincidence and not a way to save his own ass from seeing a World Series clinched with a rain shortened game. (It would have been better than what we had in 1994!!!!) Instead we had a suspended game, killing any momentum the World Series may have had.


He is approaching what will be his fourth decade of heaping potential irreparable shame on baseball (and pulling down $17 million a year to do it!)

I guess he might be like Jose Canseco... when he talked about who was doing 'roids he turned out to be a good source.

Maybe when he says A-Rod shamed the game, we should consider it a comment from an authority.