Thanks for the apology A-Rod. Now here's a few tips from your friend Sully 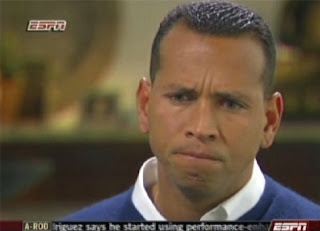 You did the smart thing by not pretending you did nothing wrong.
Really, it's going to be a zoo this spring training anyway so you might as well say "Yeah, I did it."

But when you've been lying to all of us before (and by "All of us" I of course mean Katie Couric) don't be surprised if the whole "I only did it during these three seasons" routine rings a smidge false.

Also the "Hey it was something you could get at GNC" angle also seems a bit like a dodge.

I will say the "Hey it was Loosey Goosey back then" does ring true... but are we REALLY going to believe one of the most controlling figures in sports would inject something into his body and not know EXACTLY what it is?

However those are details (details that the great Peter Gammons didn't follow up on as he lobbed softballs in his interview.)

Here's the main thing... YOU don't get to declare "The Page Turned."
YOU don't declare "It's all over."

Believe me, I've asked for forgiveness in the past. And when I was CAUGHT doing something, I didn't get to say "Well, now that I admitted it after I was caught, I'm glad that the page has been turned and let's just move on!"

Usually there involves a lot of begging for forgiveness and a lot of flowers.

Oh yeah... one more thing... when you accuse a Sports Illustrated reporter of being a crazy borderline stalker and claim that there is a police report backing your story up... make sure that story holds up.

Of course there was no report filed.

A-Rod, I have a sneaking feeling this page has been turned.