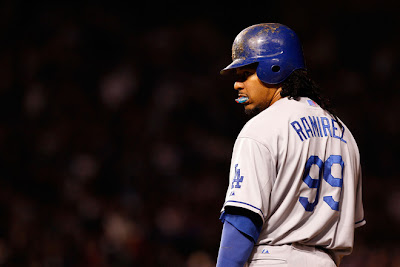 I've had a bunch of people write to me asking why I don't write more about the Manny Ramirez contract two step.

What is there to write about?
Manny is a free agent and nobody is offering him a long term contract.
Scott Boras thought there was going to be a huge market... maybe play the Angels inferiority complex with the Dodgers into a multiyear deal.
Maybe play the Mets need to give their devastated fan base a new shiny toy to play with for a big contract.
Maybe get the Giants interested because it's been a whole year since they've had an enigmatic superstar left fielder.
Maybe get the Rangers or Nationals thinking they owe their fans at least one reason to go to the ballpark.

But like Lloyd Bridges in Airplane!, it looks like he picked the wrong season to be a free agent.

Manny would have been better off taking the options on the Red Sox contract... or taking the Dodgers 2 year deal that Boras didn't think was a series offer.

So who knows what will happen?
Manny might have to take a 1 year deal.

My dad thinks he will sit out the first few months and wait for a team to get desperate.

Boras might get a 4 year deal from someone. (Remember last year he got a 10 year deal for A-Rod even though nobody other than the Yankees were bidding.)

One thing I DO know... it is so much more relaxing to not be dealing with this as a Red Sox fan!

I've always been a Manny fan but man I am happy that the Dodgers are dealing with this mess.

I am happy the Red Sox have Jason Bay in the fold and not dealing with this tug of egos.

Maybe Theo did know what he was doing again!
I trust everything he does...

Good luck Manny. Thanks for the memories... Pitchers and catchers are reporting in a few weeks. Better find a home!