You sick of the A-Rod story? Blame A-Rod. 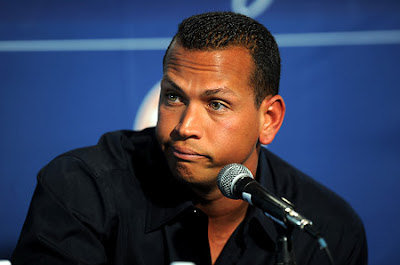 Listening to that press conference yesterday (one that Barnum and Bailey would call "A bit much) the Oliver Stone film Nixon came to mind.

Now you should NEVER think of an Oliver Stone film during a press conference, but I did.

There's a great scene between Haldeman (James Woods) and Erlichmann (J. T. Walsh) when Haldeman says "Eight words back in '72. 'I covered up. I was wrong. I'm sorry'. The American public would have forgiven him."

Well it's never a good thing to compare your public relations mistakes with Nixon's, but this whole thing would have blown over by opening day if A-Rod, given his SECOND chance to put this behind him said:

But nope, A-Rod just keeps making it worse... and now he's dragging his cousin into it?
Nice guy.

Who buys something in the Dominican, has his cousin (who probably wasn't a doctor) inject that something into his ass over 3 years, and doesn't question what it is or wonder what it does? Probably not someone who just made a quarter of a billion dollars because of his body.

And did he think the New York press wouldn't fish around for his cousin's identity?

There are way too many people writing about this subject, so there's not much I can add to it.

But everything he would have tried to avoid by dancing around the hard questions (more attention, distractions, resentment, reporters pounding him with questions) he is going to have triple fold with the "I was young, dumb and no idea what I was injecting" bull.

It didn't end well for Nixon either.