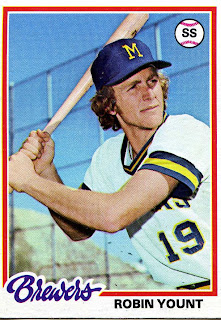 Remember how boring the Milwaukee Brewers hats were?

A blue hat with a yellow M?

That was the last hat that Hank Aaron wore professionally...
And the first that Robin Yount wore.

The Brewers needed to do something to shake things up!

And it took Tom Meindel, an Art History student at the University of Wisconsin-Eau Claire, to come up with my favorite hat logo of all time. 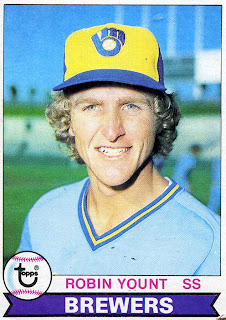 Ahhhh!
Now we are talking!

And clearly a happier Robin Yount!

Yellow front and the glove and ball logo.

And of course take a closer look at the ball and glove.

That's right...
It's an M and a B combined to form a ball and glove.

M for Milwaukee. A B for Brewer.

When a 7 year old Paul Sullivan figured that out, I had an expression that resembled Robert Langdon's when he figured out The Da Vinci Code. 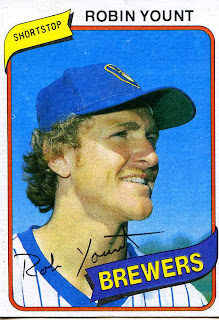 And there was the variation on the hat.
They wore the yellow front caps on the road and the all blue caps during home games.

Suddenly the most bland uni imaginable got some character and they did it without wearing a garish new color scheme a la the San Diego Padres.

Now remember the Brewers were run by Bud Selig, so naturally they made some terrible decisions. 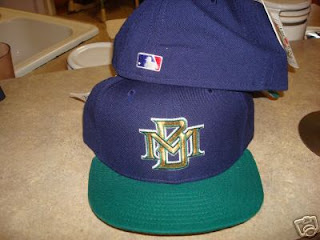 In the Mid 1990s, the Brewers scrapped the coolest hat logo in baseball for this travesty.

Yes it has the M and the B, but it was so crudely interlocked that the B looked like a D.

This had was nicknamed by some "Motre Bame."

It was ugly, awful and obviously it needed to go.

So what did they do? 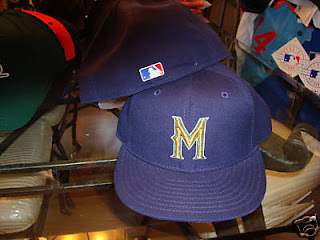 Ooooh, the M has a few bumps on the side.

COME ON!
You had the coolest hat logo of all time and you went back to an M????

There new hats are a little better... a little.

The M is at an angle and there is a little bit of barley on the bottom to signify brewing.

You think a little Barley can trump the old logo?


Jerry Seinfeld famously said that sports fans root for laundry. And as bizarre and illogical as that seems to non sports fans, it makes all the sense in the world for those of us who invest emotion in our team.

It would be great to see your team win wearing any uniform, but wouldn't it be greater to see the team wearing the threads that you remember from your youth jumping up and down as champs?

Look at these two photos. 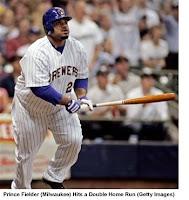 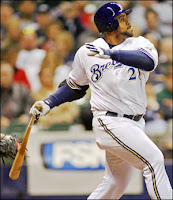 One brings back memories of Cooper, Hisle and Ben Oglivie.

The other one? He could be a Bridgeport Bluefish player at first glance.

It's very simple Brewers...
Bring back the Bad Ass Glove and Ball cap.

Not just for "Turn Back The Clock" night.
Bring it back for good.